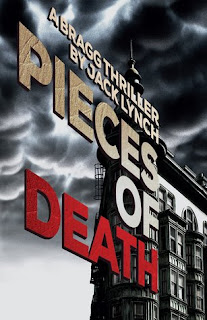 Somehow I managed to miss Jack Lunch's series of crime novels featuring San Francisco P.I. Peter Bragg when they were first published some thirty years ago, and so I'm especially grateful to the folks at Brash Books for discovering and re-releasing these titles.

Pieces of Death is the third book in the series, following The Dead Never Forget and The Missing and The Dead. In this case, a friend that Bragg knows from a local newspaper asks him to serve as a bodyguard for a guy named Buddy Polaski, who's flying into San Francisco International Airport from New York that afternoon. The friend is a little vague as to why Polaski might need someone to protect him and so Bragg takes his .45 along just in case.

A lot of good that does him. He meets Polaski; they have a quick drink and then go to the baggage carousel to pick up Polaski's luggage. As Polaski grabs his suitcase, two guys race up and pump him full of lead. There's not much that Bragg can do; understandably, pandemonium ensues in the baggage claim area and Bragg doesn't dare return fire for fear of hitting an innocent bystander. He chases after the hit men, but they jump into a waiting car and make their escape.

Why would the men have targeted Polaski and what would they have wanted? There's nothing in his luggage that would suggest a reason for his murder. With his dying breath, the man leaves Bragg with a cryptic message but he expires before Bragg can figure out what in the hell the guy was trying to say.

Bragg's client, Harry Shank, is equally cryptic. He and the departed Mr. Polaski were working some sort of a deal and Harry won't trust Bragg with the details. But Polaski was supposed to be bringing something very important for the consummation of their deal and it wasn't in his luggage. Harry wants Bragg to stay on the job, decipher the message that Polaski was trying to give him, and recover the missing items.

Bragg agrees and sets off on an investigation that very vaguely suggests overtones of The Maltese Falcon. It turns out that there are a lot of other players in this drama, including someone's very sexy wife who has designs on Bragg, and a younger, more innocent, woman who has something of the same idea. Naturally, Bragg can't trust any of these people and the story takes any number of unexpected twists and turns.

The result is another very enjoyable tale from an author who has since died but who nonetheless deserves a wider audience. Peter Bragg is a great protagonist: tough, smart and witty, and this is a book that will appeal to large numbers of crime fiction fans.
Posted by James L. Thane at 2:34 PM