Another Brilliant Effort from Don Winslow 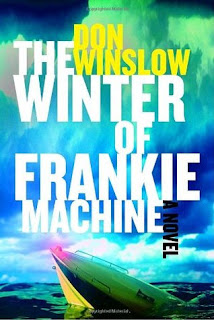 The Power of the Dog is my favorite novel by Don Winslow and it's on a very short list of my favorite books of all time. But The Winter of Frankie Machine is easily my second favorite of Winslow's books while all of the others are tied for third.

What I love most about the book is the character that Winslow has created in the protagonist, Frank Machianno. The first chapter, in which Frank rises and goes through the routine of beginning his day, is alone worth the price of admission. You'll never find a better example of an author using a few deftly-described scenes to establish his or her main character, and after reading that single chapter, it really doesn't matter what it is that Machianno does for a living or what he might do with the rest of his life. You already know that this is going to be a great character and that you'd follow him happily, no matter what path he might choose to take.

As it happens, Frank is a Vietnam vet, now in his early sixties and living in San Diego. He runs a bait shop down on the pier; he wholesales fish, and he has a few rental properties. He's on good terms with his daughter and his ex-wife; he's got a fantastic girlfriend, and he's usually in the water most every morning for the Gentlemen's Hour, which is when the older surfers paddle out on their boards, maybe catch a wave or two, and otherwise remind each other of how great they were back in the good old days.

In other words, life is pretty damned good until suddenly the bad old days rear their ugly head. Before he retired and turned legit, Frank Machianno was a hit man for the local chapter of the mob--a legend in his own time who earned the nickname "Frankie Machine" for the efficient manner with which he carried out his assigned duties. Now, an old mob boss asks Frank to referee a dispute that involves the mobster's son.

Frank agrees to do the favor, principally out of respect, only to discover that he's been set up to be killed. Someone out of his past wants him dead, and Frank has no idea who or why. His only recourse is to follow the trail of the assigned hit back up the chain and see where it leads. The only question is whether or not he can stay alive long enough to figure out what's going on and put an end to it.

In the process of tracking down the person who ordered him dead, Frank has to sort through any number of jobs he was involved in back in the day, trying to determine who he might have offended and why. It all makes for a gripping and very entertaining tale from start to finish. I loved this book when it was first published in 2006, and I enjoyed it even more, re-reading it nine years later. This is one of those books and Frankie Machine is one of those characters that will remain with me for a very long time. I can hardly wait to read this book again in another few years.
Posted by James L. Thane at 4:41 PM