Perry Mason Takes a Case on Behalf of a Stuttering Bishop 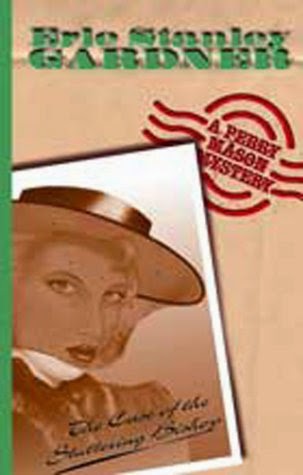 This is an early entry from the Perry Mason series, first published in 1936, When Perry could still drive anywhere in Los Angeles and get there in about twenty minutes and when one still had no problems finding a cab in L.A.

A stuttering bishop from Australia appears in Perry's office one afternoon, hinting at an injustice that began twenty-two years earlier when a millionaire, angry because his son had married against his wishes, conspires to make the son's new bride a fugitive from justice, fleeing from a trumped-up manslaughter charge. Now the son has died and it turns out that before divorcing his wife on Dad's orders, the wife got pregnant and had a daughter. After the son dies, Grandad takes the twenty-year-old daughter into his home.

The bishop can't or won't give Perry the full story and says Perry will have to puzzle it out for himself and see that justice is served. Perry is very suspicious because he can't imagine a stutterer rising to the rank of a bishop. But Mason loves a good mystery above all else and so dives in with both feet. Inevitably, someone's going to die and the case will take all sorts of complicated twists and turns.

Reading this book, one is again particularly impressed with the abilities of Mason's detective, Paul Drake, and the size of the agency that Drake runs. Paul is always there when Perry calls; he's never out of the office, and he never has to tell Perry that he's busy with another case and will get back to him next week. And he's virtually never short of manpower.

The second the bishop leaves the office, Perry is on the horn to Paul, wanting every last scrap of information about the bishop and several other people. And of course he wants it immediately. This would be virtually impossible, even in the age of the Internet, but it poses no problem for Paul. Perry also instructs Drake to track down the bishop and have him followed. Perry also wants Paul to follow everyone who contacts the bishop. Again, this appears to be no problem and Paul will dispatch several of the thirty or forty operatives who are apparently hanging around the office and ready to go to work.

My father loved these books and they were the first "adult" novels I ever read as a child, thus I've always had a soft spot in my heart for them. It's always fun to pull one off the shelf and turn back the clock to the days of my youth. As implausible as Perry's cases always are, they never fail to entertain me.
Posted by James L. Thane at 10:12 AM