A Gripping and Thought-Provoking Book from Cormac McCarthy 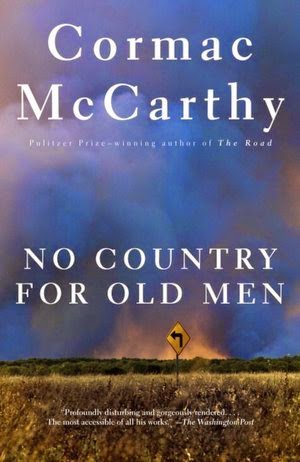 On a morning in 1980, a Texas welder named Llewellyn Moss goes out to hunt antelope and gets a lot more than he bargained for when he stumbles across the site of a drug deal gone very, very bad. Several men and a number of pickups have been shot to death and Moss discovers only one survivor who is very near death and who pleads for a drink of water.

Moss ignores the request and searches the site, discovering a large amount of heroin remaining in one of the trucks. There is no corresponding amount of money and so Moss deduces that at least one person got away. A very good tracker, he discovers the path of one wounded person leaving the site. He follows the track and comes across the man, dead, and clinging to a suitcase with a little over two million dollars in it. Anyone who's ever read a book like A Simple Plan or seen a noir movie made from that or another book like it would know damned good and well just to walk away. But if he did that, of course, there would be no story.

Llewellyn hikes out with the money, takes it home and hides it in his trailer home. So far, so good. But then, in the middle of the night, he's stricken by a pang of conscience and decides that he really should take some water out to the guy he left dying at the site of the shootout. Well, hell, a child of five knows that this is going to be a huge mistake. To his credit, so does Llewellyn. But he does it anyway.

Naturally, when he returns he runs into several bad guys who know that someone got away with their money and are damned anxious to know who it might be. They shoot up Llewellyn's pickup, but he manages to escape and make it back home. He quickly sends his wife out of town to what he hopes will be the safety of her mother and then hits the road himself in an effort to somehow escape the rain of crap that he knows is about to cascade down upon him.

On his trail is a particularly amoral and devious hit man named Chigurh who has a particularly awesome and deadly weapon and who seems to be almost prescient in determining where Moss will be. Also on the trail is an aging county sheriff named Bell. Bell is a veteran of World War II who is distressed about the changes taking place in the world around him and who speculates that in the drug warriors and especially in the person of Chigurh, there is a new sort of evil in the world that no one can hope to contain.

The result is a powerful story told by one of the great masters. Moss's efforts to extricate himself from the mess he knew he was getting himself into all along are compelling. Chigurh's apparent total lack of all human sensibilities are horrifying, and Sheriff Bell's meditations on his marriage and on the evolution of the world around him are thought-provoking and elegiac. All in all, a great novel.
Posted by James L. Thane at 7:20 PM