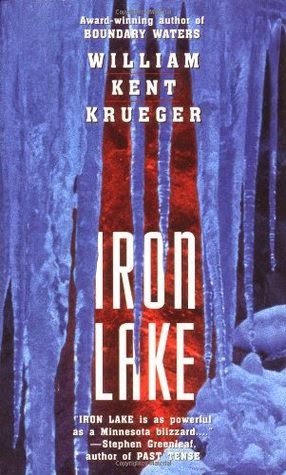 After working a number of years as a Chicago cop, Corcoran "Cork" O'Connor moves his wife and children back to Auora, Minnesota, his tiny home town in the northern part of the state. His objective is to provide his family with a better quality of life, but those dreams go up in smoke very early on, both in his professional and personal lives.

Aurora borders the Anishinaabe Indian reservation, which is enjoying a newfound prosperity as a result of the casino that has just been built on the reservation and which is practically minting money. O'Connor is part Anishinaabe himself and would seem to be the ideal bridge between the two societies. But when things take a decidedly bad turn, O'Connor is forced to stand in a recall election and is booted out of office. As the book opens, he's reduced to eking out a living running a seasonal hamburger stand. Meanwhile, his wife has become a very successful attorney and the two are now estranged.

When the town's most prominent citizen, a political boss named Judge Parrant, is found dead from a shotgun blast, the new sheriff declares it a suicide, but O'Connor isn't so sure. On the same evening that the judge dies, a young Indian boy goes missing from his paper route in a huge blizzard. Is there a possible connection between the two events?

Though no longer having any legal authority to do so, O'Connor begins investigating both developments. This will inevitably get him in hot water with a lot of people, and in the meantime, his family situation continues to deteriorate. O'Connor is also feeling guilty because, in the wake of the separation from his wife, he has secretly begun seeing a beautiful waitress with a hot sauna and a bad reputation.

The strength of the book lies principally in Krueger's description of the brutal winter landscape in which the story plays out. He's also carefully researched this history of the Anishinaabe and describes their culture and society sympathetically and knowledgeably. It's a complex story with lots of twists and turns, and a reader would be well-advised to have a hot toddy or two close at hand as a remedy for the freezing Minnesota winter.

If I have a concern about the book it lies principally with the whole idea of Cork O'Connor conducting this investigation with no legal authority to do so. This involves him meddling in crime scenes and breaking and entering into several buildings in search of evidence, legal niceties be damned. The new sheriff is something of a Casper Milquetoast, who occasionally warns O'Connor off, but who at other times works with him. It's hard to imaging this scenario ever playing out in real life, and virtually all of the evidence that O'Connor gathers would be inadmissible in any court, given that it was obtained illegally and without the benefit of warrants, proper chain of custody and other such minor matters. But if one can suspend disbelief long enough to overlook these issues, this is a very solid start to the Cork O'Connor series.
Posted by James L. Thane at 3:48 PM