From Out of Matthew Scudder's Past, a Dangerous Psycho Returns... 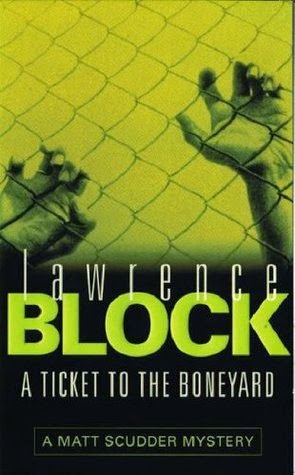 Like the previous seven novels in this series, A Ticket to the Boneyard is a great read. Unlike its predecessors, though, this one is more of a thriller than a mystery novel. And unlike the others, in this case Matthew Scudder is effectively his own client.

Twelve years earlier, while Scudder was still a detective in the NYPD, a psycho named James Leo Motley assaulted an escort named Elaine Mardell and insisted that she now belonged to him. Elaine was a friend of Scudder's; the two had been intimate, and Elaine turned to Matt for help. Motley then broke into Elaine's apartment while Scudder was there and threatened both of them while holding Elaine hostage.

Matt realized that Motley was one sick S.O.B. and that arresting him for a simple assault wouldn't put him away for nearly long enough. So Matt planted a gun on Motley and framed him for assaulting a police officer. Motley then went to the Big House, threatening along the way to kill Scudder and "all his women" once he got out.

Twelve years down the road, Elaine calls Matt. They haven't seen each other in years, but Elaine has just hear from Motley who intends to make good on his threat and has already killed a woman once associated with Scudder and Elaine.

From that point on, Scudder and Motley play a hair-raising game of cat and mouse. Motley has vowed to kill Scudder last and as the death toll rises, the cops seem unable to do anything about it. The only man with a chance to get Motley would seem to be someone willing to work outside of the law. Is Scudder willing to go that far? And how many innocent people might have to die in the meantime?

This is another great novel from Lawrence Block that will keep any reader up well into the night. And when it's finally time to go to sleep, you're really not going to want to turn off the light...
Posted by James L. Thane at 3:34 PM