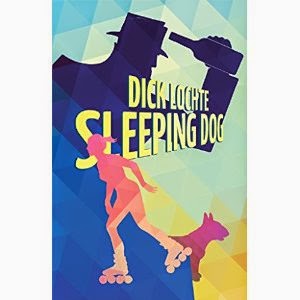 Precocious doesn’t begin to describe fourteen-and-a-half year-old Serendipity Dahlquist who’s wise well beyond her years. Neither of her parents is in the picture and so Serendipity, or Sarah, lives in L.A. with her grandmother, a famous day-time television soap opera star. Sarah’s treasured companion is her dog, Groucho, a bullterrier that was a gift from Sarah’s late father thirteen years earlier, before he went off to meet his fate in the Vietnam War.

Sarah is devastated when she returns home one afternoon to find the front door standing open and Groucho gone. She appeals to the police for help to no avail, but a police detective refers her to a P.I. named Leo “the Bloodhound” Bloodworth. Sarah straps on her roller balls and skates over to Bloodworth’s office, but Bloodworth has no tolerance for kids and even less interest in the case of the missing Groucho. When Sarah refuses to take no for an answer, Bloodworth’s office mate, a P.I. named Roy Kaspar, offers to help. He takes a retainer from Sarah, drives her home and looks over the scene. He then promises to report back in three days.

When Kaspar fails to report as promised, Sarah tracks down Bloodworth is a sleazy bar and informs him that she’s just been to his office which has been ransacked. After assessing the damage in the office, the two then go in search of Kaspar and find him murdered. Bloodworth didn’t like Kaspar very much, but Sarah insists that “When a man’s partner is killed, he’s supposed to do something about it. It doesn’t matter if he liked him or not, he’s supposed to do something about it.” The Bloodhound tells Sarah that she’s been watching too many old movies and that he’s perfectly content to let the cops handle the investigation.

In fairly short order, though, it turns out that Kaspar’s murder and the disappearance of Groucho are almost certainly related and for reasons way too complicated to explain, Sarah and Bloodworth wind up joined at the hip, on the road, and up to their necks in trouble with a particularly vicious band of Mexican criminals. It’s a very entertaining romp, principally because Lochte has created in Sarah and Bloodworth two unique, intriguing and very amusing characters. The dialogue between them is often hilarious.

The story is told through their alternating views so that the reader sees each development through the eyes of both Sarah and Bloodworth, and the end result is a great deal of fun. This book was first published in 1985, and was nominated for virtually all of the major crime fiction awards. The Independent Mystery Booksellers Association named it one of the 100 Favorite Mysteries of the Twentieth Century, but it has been out of print and largely unavailable for a number of years. Happily, it has just been re-released in a new trade paperback edition as well as in an e-book edition and so it’s now available to an entirely new audience of readers who are sure to enjoy it as much as the original audience did.
Posted by James L. Thane at 10:57 AM