Alex Delaware Tags Along on Two Investigations, One Old and One New 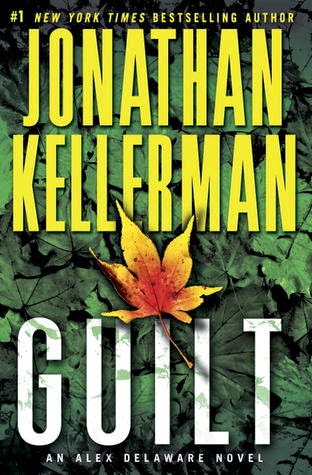 I've been a fan of this series from the very beginning and thought that the early entries were really very good. I have mixed emotions about the later books in the series, some of which are still pretty good and others of which just don't work very well for me. The 28th, Guilt, falls into the latter category.

The story opens with the discovery of a child's skeleton that was buried in a strong box beneath a tree in a wealthy L.A. neighborhood. When the tree goes over in a storm, the box is unearthed and Homicide Detective Milo Sturgis is called to the scene. As often happens, he drags along his pal, Alex Delaware. Delaware is a psychologist who occasionally consults with the department.

It's apparent early on that the child was buried nearly sixty years earlier. It's impossible to determine the cause of death and investigating the case is going to be a nightmare. Then, a few days later, another child's skeleton is discovered in a nearby park near the body of a young woman who has been shot to death. This skeleton is much more recent and so, of course, is the body of the murdered woman.

The more recent murders become the prime focus of the investigation and Delaware shoulders a great deal of the load. The trail leads into the highest echelons of the Hollywood community and is going to require a great deal of finesse. Before it's over, some very gruesome crimes and behavior will be exposed.

Neither of the investigations in this book really grabbed me, and the second seemed pretty far-fetched. But what really bothers me about this and several of the other more recent books in the series is the way in which Alex Delaware, who is after all a civilian, becomes so deeply involved in cases where he has no professional expertise to lend.

In this book, Alex will go through the motions of providing psychological counseling to a couple of the people involved. But this is really tangential to the investigations and in no way justifies his involvement in the larger investigations. When Sturgis is called to the first scene, he and Alex are having lunch and Milo invites Alex to tag along because the case sounds "interesting." But no real police detective would ever do such a thing. He would tell Alex to grab a cab home and would leave the investigation to the professionals.

To have Alex up to his neck in these cases simply defies logic and makes it impossible, for this reader anyway, to suspend disbelief. At one point, Alex uncovers what could be a very critical piece of evidence and, instead of turning it over to Milo, goes off to follow up the discovery himself, something that could seriously compromise the investigation.

I loved these books when Alex was legitimately involved and his services as a psychologist were critical to the cases and their solutions. Now that he's just tagging along in many cases with no legitimate reason for being involved, these books aren't nearly as interesting or unique. I confess, I'm also losing patience with Milo's piggish eating habits, which helped define the character early on but which, after all this time, are simply becoming gross.
Posted by James L. Thane at 12:40 PM