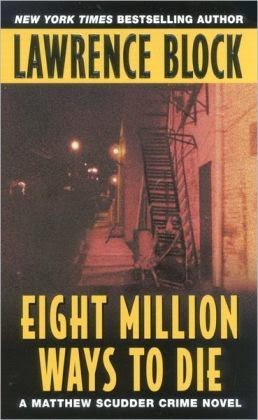 Every time I post a review of one of Lawrence Block's Matthew Scudder novels, my strong temptation is always to begin by saying that this is one of my favorite books in the series. The problem is that I love every last one of them and so they're all my favorites, which I guess makes Eight Million Ways to Die one of my Most Favorites.

The story at the heart of the novel is fairly simple and straightforward. A beautiful young call girl named Kim Dakkinen wants to leave the business, but she's worried that her pimp might object and perhaps harm her if she tells him that she's abandoning ship. So, on the recommendation of Elaine Mardell, a call girl with whom Scudder has been intimate, Kim asks Scudder to intercede and speak to the pimp on her behalf.

As most crime fiction fans know, Scudder is an ex-cop who now works as an unlicensed P.I. He also has a problem with alcohol that is getting progressively more serious, which is why, when the young woman first consults him, she finds Scudder in his "office" at Armstrong's saloon.

Scudder agrees to take the case and tracks down the pimp, whose name is Chance and who seems to be unusually wise and sophisticated for someone in his profession. Chance assures Matt that Kim is perfectly free to leave if she so pleases. Chance insists that hookers are a dime a dozen, and that he'll have no problem at all replacing her in his string.

Everything seems copacetic, but then, a couple of nights later, poor Kim turns up savagely hacked to death in a hotel bedroom. Scudder assumes that he's been betrayed by the pimp and feels a moral obligation to bring the killer to justice. From there the story takes more than a few interesting turns before ending in one of the best conclusions of any book in the series.

It's always fun to watch Scudder investigate a crime. This story is set in the early 1980s, before the invention of all the technological innovations that are now available to a P.I., and so Matt will spend a lot of time walking around town, talking to people and attempting to sort things out. He also spends a lot of time looking for working pay phones. But what sets this series apart from virtually any other is the fantastic job that Lawrence Block does in developing the character of Matthew Scudder.

Scudder's descent into alcoholism began with the very first book in the series, The Sins of the Fathers, and as I suggested above, it has grown progressively worse until by this point Scudder's health and, indeed, his very life are seriously at risk. Scudder wrestles with the problem as he struggles to solve the murder and watching him do so is as gripping as the plot of any crime novel. Block handles it brilliantly, and the way he does so, for me at least, makes this book one of the true standouts in what remains my favorite series of crime novels.
Posted by James L. Thane at 1:30 PM