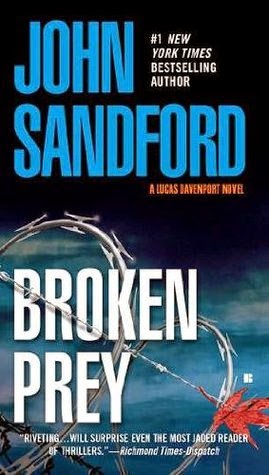 This is another very entertaining entry in John Sandford's long-running Prey series, featuring Lucas Davenport. As most crime fiction fans know, Lucas worked his way up through the Minneapolis P.D. chasing a variety of twisted, violent killers. Now he's followed his boss, Rose Marie Roux, into a state job that allows, or requires, him to work high profile cases all over the state.

This one poses a serious challenge and pits Davenport against one of the most clever and ruthless killers he's ever faced. And unlike most of the Prey novels, even the reader doesn't know who the killer is until Davenport learns the truth very near the end of the book.

The case begins when a young woman is found murdered. The victim had been been sadistically whipped with what appears to be a barbed-wire lash before her throat was cut. Her body was then left naked and on display near a river bank. It's clear that a violent maniac is at work and the case is high profile enough to demand Davenport's attention, assisted by his long-time team member, Sloan, who is still working homicide for the Minneapolis PD and who draws the case.

Shortly thereafter, another victim, this time a male, is found raped, scourged and murdered in a similar fashion. In an unbelievable stroke of luck, though, blood found under the fingernails of the second victim provides a DNA match with a sex offender named Charlie Pope who was recently released from a state mental institution. Pope is now in the wind and the chase is on.

What follows is a genuine page-turner with a variety of unexpected twists and turns. The tension rises from the git-go and is broken only by one of Sandford's most entertaining subplots. Davenport's wife, Weather, has given him a new iPod. (The book was first published in 2005, only a few years after the device was introduced.) She's also given him a gift certificate for 100 songs. Lucas is determined to load the iPod with the one hundred best songs of the Rock Era and throughout the book, everyone has suggestions for the list. The discussions are often hilarious and one could debate the final list, which is added as an appendix, into eternity. All in all, it's a thoroughly enjoyable ride.
Posted by James L. Thane at 7:10 PM