Matthew Scudder, in Danger and in a Moral Quandry 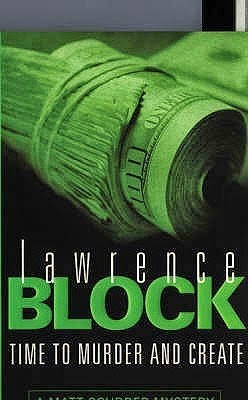 This is the second book in Lawrence Block's excellent series featuring Matthew Scudder. It doesn't pack quite the emotional wallop of the first, The Sins of the Fathers, but it's a very good read nonetheless.

For those who don't know, Matthew Scudder is an ex cop who lives in New York City and who works as an unlicensed P.I. He left the force under tragic circumstances and has since developed a drinking problem which is here noticeably worse than it was in the first book. His "office" is in a saloon, where he passes most days and evenings drinking coffee laced with bourbon.

One afternoon an old acquaintance, "Spinner" Jablon, finds Matt in Armstrong's, the saloon where Matt spends much of his time. Spinner is a minor criminal that Matt knows from his days on the force. Jablon has apparently gotten himself into some sort of trouble and believes that his life may be in danger. He asks Matt to hold an envelope for him and to open it only in the event that something happens to him. Matt presses for an explanation, but Jablon tells him that he'll know what to do if and when he has to open the envelope.

Well, obviously, we all know what's going to happen next. Poor Spinner winds up floating in the East River, and when Matt opens the envelope, he discovers that Jablon had been blackmailing three fairly wealthy people. Jablon assumes that one of them will have been responsible for his death and leaves three thousand dollars in the envelope along with the blackmail materials. He wants Matt to discover who killed him and bring him or her to justice.

Matt could just stuff the three grand in his pocket and forget about it since his client is no longer around to complain about it. But Matt isn't that kind of guy, and Spinner knew it. Matt feels morally obligated to follow through and so develops a plan for smoking out the killer. But naturally, the best laid plans sometimes have unintended consequences. As a result, Matt finds himself in the middle of a moral quandary and discovers that his own life may now be on the line.

This book is now nearly forty years old, but the story is still as gripping as if it were written yesterday. One gets so caught up in it that you're only marginally aware of the fact that it takes place in an era when there were no cell phones or computers and when investigative techniques were significantly more primitive than they are today. Given that this is one of the most celebrated series in all of crime fiction, it's hard to imagine that there's any fan of the genre who has not yet discovered it, but if that should somehow be the case, do yourself a very great favor and look for it.
Posted by James L. Thane at 12:38 PM