John Rain Returns -- And Just in the Nick of Time 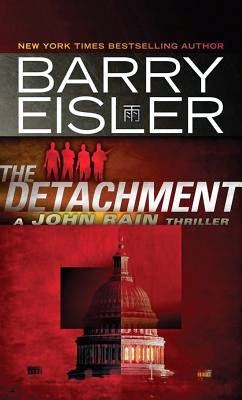 After a four-year absence, assassin John Rain returns in The Detachment. Of late, Rain has been living quietly under the radar in Tokyo, visiting his favorite jazz clubs, coffee shops and whiskey bars, but he remains ever-vigilant and one night, while training at his local daidojo, he notices two Americans who seem strangely out of place. When he sees them a second time, he knows that he has fallen into someone's crosshairs.

That someone turns out to be Col Scott Horton, head of a secret military group of covert killers, who convinces Rain to meet with him in L.A. Once there, Horton lays out a chilling scheme in which a group of plotters is planning a coup against the United States government. Their plan is to make a series of "false flag" attacks against targets in the U.S. which will be blamed on Islamic extremists. In the wake of these attacks, the president will suspend the Constitution and rule the country under special executive powers, dispensing with such inconvenient obstacles such as the Congress, courts and voters. The assumption is that, scared witless by the attacks, the American people will happily surrender what little remains of their liberties for the sake of their safety.

Horton wants Rain to lead a team that will assassinate the three principal coup plotters and thus head off the threat. There's a big payday involved for Rain and the chance to do some good for the American people at the same time. Naturally, this won't be easy, which is why Horton needs someone like Rain. Rain accepts the challenge and calls in his old friend, Dox, to fill out the team which will also include two of Horton's hand-picked men.

What follows is a great thrill ride that is guaranteed to keep any reader awake well into the night and perhaps for a good long time thereafter. In addition to being an excellent thriller, this is a very scary and thought-provoking book as well. Given the way so many Americans were willing to compromise their fundamental freedoms in the wake of the 9/11 attacks, it does not seem at all beyond the realm of possibility that a scheme like this might succeed. Eisler has done a lot of research on rendition, secret prisons, government torture of suspected terrorists, and other such unpleasant topics, and has woven this into the story to create a very plausible scenario in which a plot like this might be nothing more than the next logical step, given the developments that have occurred in the U.S. over the last decade.

Inevitably, the book contains a lot of twists and turns and enough action to satisfy any fan of the genre. There's a great deal of tension among the members of Rain's team and it's never really clear who can and cannot be trusted, both within and outside of the team. Eisler, who was once himself a covert op for the CIA, clearly knows his stuff. He's an excellent writer and has a gift for spinning a story that keeps you riveted and turning the pages. Fans of the series will be very happy to see Rain return and those who haven't yet made his acquaintance will likely be scurrying to find the earlier books in the series after reading this one.
Posted by James L. Thane at 12:09 PM