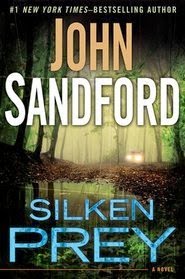 He suspects a frame-up and so calls in Lucas Davenport, head of the Minnesota Bureau of Criminal Apprehension and asks him to look into it. As Davenport begins to investigate, a Democratic political fixer, known to play the occasional dirty trick and who had access to Small's computer, turns up missing and presumed dead.

The case develops in ways that are unusually frustrating for Davenport and winds up concluding in a way that is more than a little unsettling for a variety of reasons. This is the twenty-third book in this series and, inevitably in a series this long, some of the entries are bound to be a bit stronger than others. Given that the Davenport character is always consistently entertaining, the books in the Prey series tend to succeed basically on the strength of the villains.

Sandford has created some of the truly great villains in modern crime fiction, but I found this one to be a bit less compelling than some of his others and so enjoyed the book a bit less than others in the series. If pressed, I'd probably give this 3.8 stars for that reason. I certainly enjoyed the book, but when I'm lying on my deathbed, reaching out for one last great Lucas Davenport novel to read before shuffling off into the Great Beyond, it probably will not be this one.
Posted by James L. Thane at 5:08 PM