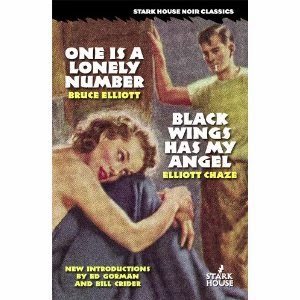 This is a classic noir novel, originally published in 1952, that had long been virtually forgotten. Happily, it has been resurrected by the folks at Stark House Press and republished in a new double edition that also contains the excellent Black Wings Has My Angel by Elliott Chaze.

The protagonist is Larry Camonille, who has just led a prison break in which ten cons have escaped from the state pen in Joliet, Illinois. Camonille makes his way to Chicago where his girlfriend is supposed to be waiting with the money that Camonille has entrusted to her. Inevitably, of course, he arrives in the Windy City only to find that both the girlfriend and the money are long gone.

Camonille is not in the best of health and has only one lung. He is determined to make his way to Mexico, where he believes that the weather will be better for his health. But he's broke in Chicago, and one by one, the cons he escaped with are making the mistakes that allow them to be recaptured and sent back to prison.

Camonille is determined to avoid that fate and so robs a dope house to get some traveling money. He loses that fairly quickly to a sadistic railroad detective and finds himself broke again and on the road outside a small town in Ohio. His luck seems to turn for the better when a woman named Vera picks him up in her Cadillac and gives him a ride to a roadhouse outside of town. Vera is a widow who has some miles on her, but she knows the manager of the roadhouse and convinces him to give Camonille a job as a dishwasher.

In the usual fashion of a book like this, Camonille's situation gets trickier as things move along, and before you know it, the plot involves crooked lawyers, bickering spouses and a young teenage girl who is strangely attracted to Camonille, just as is his patroness, the lush and randy Vera. It all makes for a very combustible mix that includes more than a little kinky sex, which is fairly vividly described for 1952. The poor hapless Camonille is determined to escape the lawmen who are still hunting for him and to make his way to Mexico, but all sorts of webs are tightening around him and the odds of his making it don't look good.

All fans of noir fiction should be grateful to Stark House for reprinting this book and it's companion. They are both great reads and true classics of the genre.
Posted by James L. Thane at 2:37 PM