Mul and Grookta Togeher Again (Even if Grookta Is Dead) 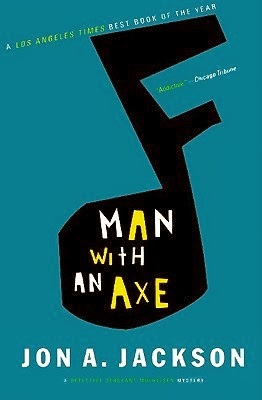 With this book, Detective Sergeant "Fang" Mulheisen returns from his adventures in Montana involving his old adversary, Joe Service, to his hometown of Detroit. The book begins when a young couple pulls into the parking lot of the Red Fox restaurant in suburban Detroit at about 2:30 on the afternoon of July 30, 1975.

Those familiar with the history of the Motor City will recall that on the afternoon of July 30, 1975, famed Teamsters' Union leader, Jimmy Hoffa, disappeared from that very parking lot. Imagine the reader's surprise then, not to mention that of the young couple, when Hoffa jumps into the back of their VW van and demands that they drive off, preferably faster than the two hoods who are chasing him.

With that the book is off and running--literally. Our intrepid hero, Mulheisen, is too young to be on the police force yet, but his mentor, the infamous Grookta, is on the force and becomes entangled in a series of events that follow Hoffa's disappearance. But Grookta's actions remain a secret and over twenty years later, Hoffa is still missing and no one knows how he disappeared or where he went.

Enter Mulheisen, who's minding his own business in the late 1990s, when a sexy young female historian approaches him. She's got a grant to do some research into the history of the Detroit PD, and she wants to interview Mul about Grookta, who's been dead for a number of years by this time.

One thing leads to another, and Mulheisen discovers a set of journals left for him by Grookta, detailing the developments of that long-ago summer in 1975. Mulheisen has to go on a scavenger hunt of sorts to find the journals one at a time, and the mystery unfolds along the lines of an onion gradually being peeled back.

It's a very intriguing story involving a number of jazz musicians, both real and fictional. The author, Jackson, is a jazz aficionado, and the book reveals his depth of knowledge about the jazz scene, particularly in Detroit. It also differs from the earlier books in the series in that this one is told from Mulheisen's first-person POV, rather than from the third-person POV of several characters as was the case earlier.

The L. A. Times dubbed this a "Best Book of the Year," and it's easy to see why. It's a captivating story populated with a great cast of characters, and a thoroughly enjoyable read.
Posted by James L. Thane at 12:29 PM