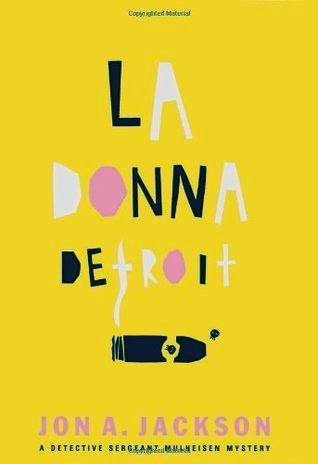 Detective Sergeant “Fang” Mulheisen continues his campaign against the Detroit mob, in this, the eighth entry in the series. In this case, though, Mulheisen remains off-stage until the book is nearly finished when he finally appears and attempts to sort out the chaos that has resulted from developments earlier in the novel.

As a practical matter, the main character in La Donna Detroit is mob boss Humphrey DiEbola. Humphrey ascended to the top spot following the timely (or untimely, depending on your point of view) death of his predecessor. But the times they are a-changin’ and the responsibilities of the job are beginning to weigh on DiEbola. He’s haunted by memories of the past, and while he’s managed thus far, to stay a step ahead of Mulheisen and the representatives of other law enforcement agencies, he may be living on borrowed time. In consequence, Humphrey has begun moving into more legitimate enterprises and is suggesting, at least to some confidants, that he is thinking of retirement. But who might succeed him?

The person responsible for the death of Humphrey’s predecessor was Humphrey’s surrogate niece, Helen Sedlaceck, who not only whacked Carmine, the former mob boss, but ran off to Montana with her lover, a mob consultant named Joe Service, and several million dollars of the mob’s money.

Humphrey made an unsuccessful attempt to get the money back and now offers to forgive Helen. She returns to Detroit and it appears that Humphrey might be grooming Helen, who was the daughter of one of his most trusted lieutenants, to succeed him. What follows is a complicated scheme involving Humphrey, Helen and Joe. One can never be sure what is actually happening or who one might really be able to trust. But it’s an extremely enjoyable romp with a surprising climax, and another solid entry in a very engaging series.
Posted by James L. Thane at 12:41 PM