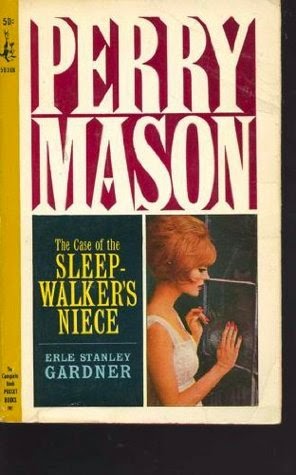 Peter B. Kent has more problems than a monkey on a rock. His greedy, grasping, avaricious wife wants to take him to the cleaners in a divorce. His business partner is a crooked S.O.B. who's trying to con Kent into paying him a ton of dough. And If that weren't bad enough, Kent has taken to sleepwalking, wandering through the house in the dead of night carrying a carving knife.

Thankfully, he's got Perry Mason on the job to alleviate all these problems. On the advice of his beautiful and concerned niece, Kent has consulted Mason because the niece is afraid her uncle might stab somebody while wandering loose through the house in a trance. And fortunately, Mason has Paul Drake, his faithful detective, to back him up. No task is ever too great for Paul; if Perry needs six hundred people tailed at once, Paul always has enough operatives to get the job done, and there's no piece of vital information that he can't miraculously produce almost in an instant.

Sure enough, Mason is no sooner on the case than someone in the extended Kent household turns up stabbed to death, and the bloody carving knife that did the deed is found under Kent's pillow. The D.A. insists that Kent is guilty of premeditated murder and that he invented the whole sleepwalking story as a defense. The evidence would strongly suggest that the D.A. has an airtight case, but can Mason still somehow save his client? Will the sun rise in the East tomorrow?

This is another fun entry in the long-running series. In the end, it doesn't really make any more sense than 95% of the other Perry Mason novels, but nobody cares about that. The enjoyment comes from watching Perry cut corners (always legally, of course) and run circles around poor Hamilton Burger. And he's not about to disappoint his legion of fans in this case.
Posted by James L. Thane at 4:45 PM