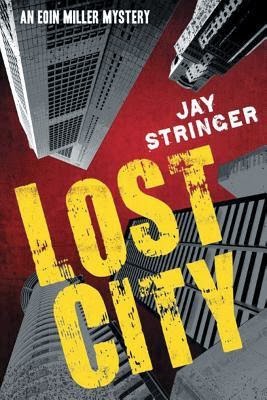 Eoin Miller is the right-hand man of his childhood friend, Veronica Gaines, who has now taken over from her father as the leader of Birmingham's most powerful crime family. Neither Eoin nor Veronica has an easy job, and Eoin is basically the troubleshooter who cleans up the messy situations that can often result when one pursues a life in crime.

Lost City opens with a terrific scene that finds Eoin in bed with Veronica's younger sister, Claire. But Veronica phones at the most critical of moments to call him away to deal with a disaster at a sleazy hotel where the third floor is reserved for various criminal enterprises. Eoin, who is also an ex-cop, arrives on the scene to find a small-time hustler named Jellyfish, who's been stabbed to death. With Jellyfish is a hooker, who's apparently stoned or in shock, or maybe a combination of the two, and who appears to be responsible for bringing Jellyfish to his bloody and untimely end.

Eoin is left to deal with the mess, but right off the bat, he makes a critical mistake and before he can even get the room cleaned up, the hooker has disappeared, another body has been added to the mix, and the entire situation is spinning out of his control.

With that, Eoin is launched into a dark and complex web of danger and intrigue, where he can never be certain who he can trust. The cast includes the aforementioned Gaines sisters and their father, along with Eoin's estranged wife, Laura, who is herself a cop, and Eoin's gypsy father who has problems of his own. There are a number of very scary gangsters who seem to have no scruples at all, and if Eoin is even going to survive, let alone sort out this ever-expanding mess, he will need to keep his wits about him and stay at least a half a step ahead of an awful lot of people who would be happy to put him permanently out of the picture.

This is a very dark, engrossing tale with a great group of characters. Stringer also excels at setting the scenes in and around England's "second city," and this is a book that should appeal to large numbers of noir fans.
Posted by James L. Thane at 12:49 PM