Life and Death in Narrows Gate 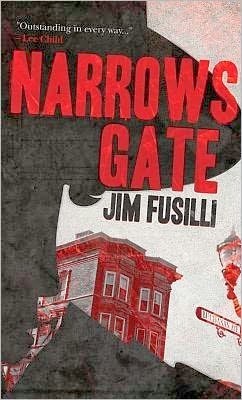 This is a sprawling, epic novel set in a fictional New Jersey town that sounds a lot like Hoboken. It takes place in the years surrounding the Second World War, a time when this waterfront community was deeply infested by the mob. Different Mafia factions are struggling for power and place, and against that backdrop, the lives of a number of characters play out.

The three principal characters have known each other since childhood. The first, Leo Bell, is anxious to escape the boundaries of the community in which he's lived all his young life. He's bright, determined to get a good education, and sees a path to the future during the war when he joins the fledgling agency that would become the CIA.

Leo's best friend, Sal Benno, has no such ambitions. He had no appetite for school and became an errand boy for the local mobsters, but without climbing very far up the ladder of the criminal clique he serves. Sal and Leo have each others' backs, but the world they live in will ultimately serve up some harsh tests.

The third major character is Bebe Marsala, a gifted singer, but a deeply flawed character. Bebe rises to national prominence during the war, but gradually sells his soul in the hope of grasping the fame and fortune to which he aspires. On a good night, in front of a responsive and adoring audience, Bebe experiences the highest of the highs. But when things don't go so well, he basically becomes a jumbled up mess.

There's a rich class of supporting characters, and Fusilli portrays them all with great sensitivity. He's also expertly drawn the time and place in which the story is set. It's an engrossing tale that will appeal to a large number of readers who enjoy books like The Godfather and who relish a story vividly told.
Posted by James L. Thane at 6:18 PM