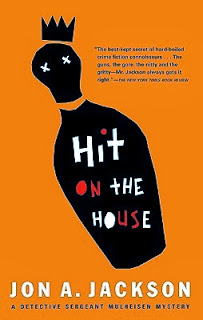 This is a crime novel with a great cast of characters, beginning with "Big" Sid Sedlacek, a Detroit mobster. Big Sid has been skimming money off the top and cheating his cronies who thus hire a hit man named Hal Good from that nest of hit men in Iowa City, Iowa, to deal with the problem. Unbeknownst to the other crooks, Hal has been assisting Big Sid in ripping off his fellow mobsters and so eliminating Sid allows Hal to collect on the contract, cover his own tracks, and make off with a fair share of the loot.

As the book opens, Hal shoots Big Sid one evening in front of the Sedlacek family home. But the cops get there so quickly that Hal is still walking away from the scene and gets swept up in the net of suspects that the cops corral. But Hal is clever enough to escape custody and make his way back to the safety of Iowa.

Enter Detective Sergeant "Fang" Mulheisen, who is assigned the case. Unfortunately for Mul, once Good has escaped, there's no suspect and no evidence worth pursuing. If that weren't bad enough, Mulheisen is now reunited with a former high school girlfriend named Bonny who left Detroit for bigger and better things and went on to be a Playboy centerfold. Now in her thirties, Bonny is still very hot and apparently still attracted to Mul.

Bonny's husband, Gene, also got caught up in the net of suspects following Big Sid's murder, allegedly while on his way to the store to get Bonny some rosemary, and Bonny would like Mul to get him out of the can. Mul does so, but there's something about Gene that doesn't add up.

From this point, things are off and running, and the mob will bring in an outside investigator, Joe Service, who has tangled with Mulheisen before, in an effort to track down the millions that are still missing after Big Sid's demise. It all makes for a very entertaining read, and it's especially fun to see Joe Service back in action. Jon A. Jackson never got the rep that accrued to his fellow Detroit writer, Elmore Leonard, but he should have. This book is that good.
Posted by James L. Thane at 12:55 PM