Amos Walker, Back on the Job 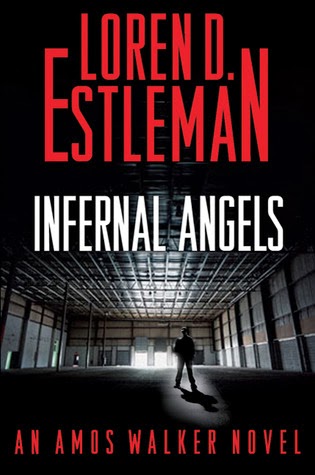 Detroit P.I. Amos Walker appears for the twenty-first time in Infernal Angels. As always, the case seems innocuous enough at the beginning: a resale dealer has been burglarized and twenty-five HDTV converters have been stolen.

Amos is a detective of the old school who still drives a souped-up Oldsmobile Cutlass and who only recently--and begrudgingly--got a cell phone. He wouldn't know an HDTV converter from an Xbox 360. The dealer patiently shows him the sample he was sent ahead of the shipment that was stolen and explains what it does. That night, the resale man appears on television, showing the sample converter to a reporter who has tumbled to the story.

The burglar, or burglars, now realizing that they apparently missed one of the converters, return to the scene and steal it, this time killing the resale dealer in the process. One might wonder why in the hell an HDTV converter, or even twenty-six of them, would be worth all this trouble, but as Walker belatedly discovers, the twenty-five that were originally stolen were packed with super high-grade heroin and were shipped to the resale dealer by accident.

Now a fortune in primo heroin is missing and drug addicts are dropping like flies on the streets of Detroit. The dealer had hired Walker for three days, and Amos feels honor-bound to give the man his due, even though the client has now expired. This will involve him with a lot of rough characters and, to make matters worse, the local cops and the Feds will soon be all over his case.

Amos Walker is his own man, and he doesn't take a lot of crap from people, irrespective of their rank. As is usually the case in these books, his determination and his insubordination will get him into a lot of trouble. It will also get the crap beaten out of him a couple of times, which is no small thing for a guy who's getting on in years. But Walker will soldier on as always, and will see the case through to the end, no matter the outcome or the risk to his own well-being.

This is a very good entry in an excellent series. If you like your action down and gritty and your P.I.s clever, tough and mouthy, you'll want to search it out.
Posted by James L. Thane at 1:34 PM