A Great Entry in the Detective Sergeant Mulheisen Series 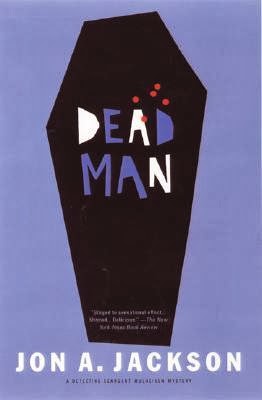 This is the fifth of the ten books by Jon A Jackson featuring Detroit Detective Sergeant Mulheisen and Mulheisen's nemesis, mob enforcer, Joe Service. And it remains my favorite book in an excellent series.

At the end of the previous book, Hit on the House: Detective Sergeant Mulheisen Mysteries, a Detroit mobster was killed and a vast amount of mob money went missing. While other threads in the book were neatly tied off, the murder was not solved and the money was not found. Mulheisen suspects that Helen Sedlacek, the daughter of another murdered mobster, may have revenged her father's death by killing the mobster whom she blames for his death. But Helen is in the wind, as is the mysterious Joe Service.

Deadman opens with Service driving down I-90, just outside of Butte, Montana, enjoying a gorgeous fall day. But the day turns decidedly ugly when Joe stops to help a man in trouble and is shot and left for dead by the side of the road. Miraculously, he somehow survives and winds up in a Butte hospital in a coma and unable to communicate. Meanwhile, Helen waits in the cabin that she and Joe are sharing out in the mountains. When found, Joe had no identification and so he is initially listed on the hospital's roster as "Deadman."

An attractive young nurse is smitten with Joe and sees to his care, something that involves some interesting sponge baths. Meanwhile, Helen finally realizes what has happened. She begins sending cashier's checks to the hospital to pay for Joe's care, but realizes that the bad guys are on their trail and begins taking steps to protect herself. Mulheisen also picks up the scent and winds up in Montana to investigate, at which point the story really takes off.

A city boy from Detroit, Mulheisen is a fish out of water in Montana and it's great fun watching him interact with the locals. The book is populated by a number of great, vividly-imagined characters, and it moves at just the right pace from the opening scene to a brilliant climax. It's a great read, and it's hard to imagine that there's any fan of crime fiction who would not enjoy this book.
Posted by James L. Thane at 1:34 PM