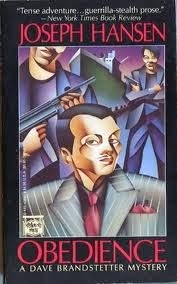 Dave Brandstetter, the insurance claims investigator who is the protagonist in Joseph Hansen's excellent series, is feeling his age. He's been threatening to retire for a while now and at the opening of this book, he officially pulls the plug. Dave sends letters to all of the insurance companies for which he has been a claims investigator announcing that he is calling it quits, much to the delight and relief of his lover, Cecil.

Unhappily for Cecil but happily for the reader, Dave's retirement lasts all of about two pages until a sympathetic young public defender comes begging for his help. A prominent Vietnamese businessman has been murdered. The victim owned an aging marina and was in the process of selling it to developers. The marina was basically the last stop for a group of aging boaters who live there on their even more dilapidated boats. Once the marina is sold, they will be kicked out with nowhere to go.

The marina residents have been protesting the sale and the group's spokesman, a particularly unpleasant man, has been arrested and charged with the murder. The young woman representing him believes that his is innocent and lays a guilt trip on Dave, claiming that he is the only one who can save her client.

Dave agrees to look into the case, which takes him into the heart of L.A.'s tightly knit and very secretive Vietnamese community. (The book is set in the late 1980s, when many Vietnamese had just moved to California in the wake of the fall of Saigon.) Dave uncovers a number of secrets that powerful people would like to protect and inevitably puts himself in grave danger.

This is another well-told story with a very engaging and sympathetic protagonist, and it's especially interesting for the glimpse it provides into the world of the Vietnamese who were coming to the U.S. at this time. Although the book is now over a quarter of a century old, it does not feel dated, and the reader is immediately immersed in this very interesting world. Another winner from Joseph Hansen.
Posted by James L. Thane at 5:43 PM