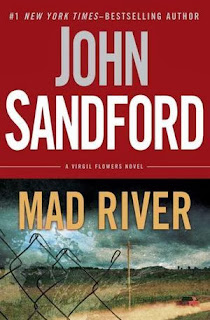 Jimmy Sharp is the de facto leader of two other loser kids from rural Minnesota, his girlfriend, Becky Welsh and a guy named Tom McCall who's hanging around with them because he's attracted to Becky and apparently because he has nothing better to do.

While working as a waitress at a homecoming dance, Becky spies a diamond necklace worn by the wealthiest woman in a small neighboring town. Now, Jimmy leads his two confederates on a middle-of-the-night mission to break into the woman's house and force her to give up the diamonds. But no sooner are the three in the house than all hell breaks loose and Jimmy shoots someone before there's a chance to grab the diamonds or anything else of value.

The three flee the scene only to discover that Jimmy's junker car won't start. But they spot a man walking toward a car in the parking lot where they've stashed the getaway car. Jimmy runs up behind the man, shoots him, and steals his car, and just that quickly their crime spree has begun.

In his efforts to track the three killers and end their spree, Virgil almost immediately locks horns with the local sheriff and his deputies who seem hell-bent on executing the three kids on the spot, rather than bringing them in. Virgil is the son of a Presbyterian minister and has a moral code somewhat stronger than that of the sheriff. He also takes his job as a lawman seriously, and so he's determined to capture the suspects and see that they get a proper trial.

It turns out that here's a lot of places to hide out in rural Minnesota, and the three fugitives also catch their fair share of lucky breaks, which means that their killing spree is going to go on for a while, frustrating Virgil and everyone else involved. From the selfish standpoint of the reader, though, it's great to watch the story unfold and as always, it's enormous fun to watch Virgil in action.

Even in the midst of a story this grim, Sandford works in a lot of wry humor that does not seem out of place or inappropriate. As always, it's fun listening in to the conversations between Virgil and his boss, the legendary Lucas Davenport. We even get to meet Virgil's parents in this book and they seem like very nice people. All in all, it's a great ride and fans of this series will eagerly devour the book. It's sure to make new fans for Virgil as well.
Posted by James L. Thane at 12:57 PM