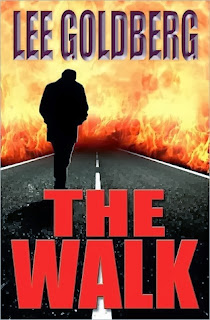 Marty Slack is a failed writer-turned television executive. His job description is a bit elusive, but seems mainly to involve convincing other people that he's somehow essential to the process. He drives the requisite Mercedes; he lives in a gated community with an attractive wife who's a former actress, and he scores good tables at all the important restaurants. He's very solicitous of those people who can advance his career, not so much so of those who can't.

Despite his apparent success, Marty is nagged by self-doubt; his marriage is in trouble, and then one morning his problems really begin in earnest. He's just leaving the dilapidated warehouse in a run-down section of L.A. where his network is filming the pilot of a new show, "Go to Heller," when the BIG ONE hits southern California.

Following the quake, Marty comes to lying under the wreckage of his Mercedes and all around him the city lies in ruins. Buildings have toppled; freeways have buckled; fires are raging out of control, and the bodies are scattered everywhere. Like many L.A. residents, Marty has prepared for this day and he has stowed some water and other basic survival gear in his trunk. Otherwise, he's up that well-known tributary absent a paddle.

Overwhelmed with thoughts of his wife, Beth, Marty knows that his only choice is to begin the long and very dangerous walk from the shattered downtown to his home. As is inevitable in a book like this, his walk will be a journey of self-discovery and will allow Marty ample opportunity to examine his life, the choices he has made, and perhaps to become a better person in the end.

Walking along with him is enormously entertaining. Goldberg, who, in addition to writing novels, has himself had a long and very successful career in television, has created in Marty a complex character who turns out to be a very appealing companion for a journey of this magnitude. The other characters are also very well drawn and their collective story provides moments of great terror, humor and grace under fire. All in all, this is a book that should appeal to large numbers of readers.
Posted by James L. Thane at 5:44 PM