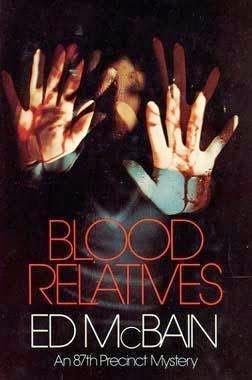 This book, which first appeared in 1975, is about halfway through the 87th Precinct series and it's one of the better books in the series. Two young female cousins, seventeen and fifteen, are walking home late one night after a party in a driving rainstorm. As they take refuge from the rain in an abandoned building, the elder of the two is viciously stabbed to death. The younger, though cut in several places, manages to run to the 87th Precinct station house where she reports the crime.

The younger girl is able to give the detectives a fairly detailed description of the man she says attacked them, and the detectives' first step is to interview known sex offenders. They find one who closely matches the description the girl has given them and the guy has the world's worst alibi for the time of the attack. But when the young girl looks at a lineup, instead of identifying the known perv, she mistakenly picks out a detective.

Her mistake totally destroys the girl's value as an eyewitness and so Steve Carella and the other detectives on the case are forced to fall back on other, much more pain-staking and difficult methods in their attempt to capture the guilty party. There's more than the usual amount of police procedure in this book, and it's fascinating to watch the way in which the detectives would work a case like this--or at least the way they would have worked it forty years ago, before the advent of DNA testing and other more modern investigatory tools.

It's a very entertaining book that takes a number of totally unexpected twists and turns, one that's sure to appeal to any fan of the series and to most readers who enjoy crime fiction.