Charlie Hood Attempts to Stem the Flow of the Iron River 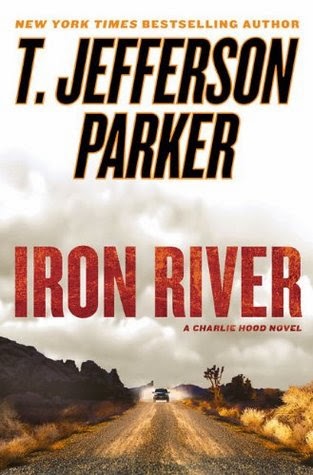 This is the third installment in T. Jefferson Parker's excellent series featuring Charlie Hood. Hood is an Army vet who has become an L.A. County deputy sheriff. Here he joins a taskforce called Operation Blowdown, which is assigned the virtually impossible task of slowing the flow of guns from the southwestern United States into Mexico along the so-called "Iron River."

Early on, Hood and the other agents assigned to the operation wind up in a firefight with some gun runners and a young bystander is killed in the crossfire by a bullet fired by one of Hood's team members. Unfortunately, the victim is the son of Benjamin Armenta, who is the powerful and violent head of the Mexican Gulf Cartel. Armenta swears revenge against the task force, even to the extent of sending his forces into the U.S. to kidnap one of the task force members.

At the same time, a man named Ron Pace is presiding over the demise of his family's gun manufacturing company, Pace Arms. The firm manufactured a gun that malfunctioned and killed a child. The resulting lawsuit bankrupted the company and Pace is winding down the business. But he is approached by young Bradley Jones, the son of the bandit known as Allison Murrietta, the antagonist of L.A. Outlaws, the first book in the series. Allison and Charlie Hood were lovers for a time and Hood still feels a strong connection to her son.

Bradley is now running money into Mexico for one of the cartel drug lords, and he proposes that Pace secretly reopen his assembly line to make guns that the drug lord can use against his enemies. Pace will be very well paid for the effort and he readily agrees.

Also in the mix is a mysterious man named Mike Finnegan, who is hit by a car and left for dead while changing a flat tire along the side of the road. He somehow survives and, although badly injured, is slowly recovering in a hospital in the tiny town of Buenavista. Finnegan has a note in his pocket instructing him to contact Charlie Hood. Hood has never heard of the man, but he comes to the hospital and his visit begins a curious relationship between the two men. Finnegan, who appears to be something of an idiot savant, somehow knows things about Hood and about the case Hood is investigating that seem impossible.

The mix of all these threads results in a very entertaining story. Parker has obviously done a lot of research for the book, and the reader is almost overwhelmed by the violence of the drug wars, which are conducted with weapons imported almost exclusively from the U.S. One is also left with the impression that the efforts to control the flow of guns along the "Iron River" are the equivalent of the efforts of the legendary Dutch boy trying to hold back the flood waters by sticking his finger into the dike.

Charlie Hood soldiers on as best he can, but you can't help but feel that he's fighting a losing battle. Iron River is a book that will appeal to large numbers of readers and which will leave them thinking about the issues that Parker raises here long after they have turned the final page.
Posted by James L. Thane at 3:19 PM