Crissa Stone Is on the Hunt and on the Run 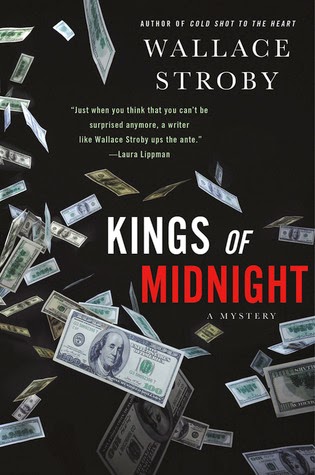 Crissa Stone returns in another excellent hard-boiled novel from Wallace Stroby. Crissa is a career criminal who reminds many readers of a female version of Richard Stark's Parker. She certainly seems to have the same sort of luck that often bedevils Parker when even the best-laid plans often go awry.

Crissa also looks forward to being reunited soon with her lover, Wayne, who is currently doing a stretch in the pen. Wayne is quite a bit older than Crissa and believes that she should move on without him. But Crissa loves him very much and is hoping that he will soon be paroled. To that end, Crissa has been spreading her hard-earned cash around where it will do the most good.

As a result of all of this, Crissa has expenses to meet and as the book opens, she and two associates have just finished pulling off a string of surprisingly profitable ATM thefts. But as they divvy up the money from the last job, the two associates have a falling out and wind up dead. Crissa is now on the run with the money, trying to avoid the fallout from her confederates' stupidity.

Meanwhile, a former criminal named Benny Roth has a plan to hunt down several million dollars still missing from a robbery in the 1970s and that was allegedly hidden by a mobster who has recently died. A mutual friend hooks Benny up with Crissa and she ultimately agrees to join the hunt. Inevitably, of course, there are others interested in finding the money, and some of them are pretty badly bent. The result is that Crissa is soon in very serious trouble and there may be no way out.

This is a spare, stripped-to-the-bones story that is guaranteed to keep a reader's heartbeat elevated from the first page to the last. Stroby is a gifted writer who has created in Crissa Stone a memorable and intriguing character. It's hard to imagine any fan of hard-boiled crime fiction that will not enjoy this book.
Posted by James L. Thane at 4:55 PM