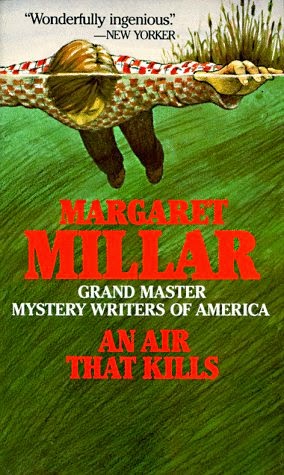 This is a fairly intense psychological thriller, set in Canada, that was first published in 1957, and which seems a bit dated at this point.

As the book opens, four men are preparing to go on a weekend fishing trip. The four, who are best friends, are to meet at a rural lodge which is owned by the wealthiest of the four and which is to be their weekend headquarters. However, Ron Galloway, the owner of the lodge, clearly has other plans as he is packing to leave his house in town, and he never makes it out to the lodge.

The other three men, including Galloway's best friend, Harry Breem, can't imagine what might have happened to him. Harry is a pharmaceutical rep, and is one of those mild mannered guys without much strength of character--the kind of guy who never seems to take charge of his life, but who rather helplessly watches it roll over him.

Harry married a bit late in life, and his wife, Thelma, is more than a little quirky herself. Esther, Galloway's wife doesn't like her at all. Galloway insists that he doesn't care much for Thelma either and claims that he tolerates her simply because she's the wife of his best friend.

When Galloway disappears, without ever reaching the lodge, his friends and the police begin an intensive search and in the process, Galloway's friends discover things about him--and about themselves--that they might have been better off not knowing. It would be unfair to say much more than that about the plot, and this is another case in which the tease for the book probably gives away too much. Suffice it to say that the tension builds to a surprising climax.

This is not a crime novel in the traditional sense; certainly it's not the sort of book that Millar's husband, Ross Macdonald would have written. But it's interesting to watch the principal characters in the book react to the developments that unfold. Millar had a long and distinguished career herself and this is a book that will appeal to those who want a broad understanding of how the crime fiction genre has evolved over the years.
Posted by James L. Thane at 2:37 PM