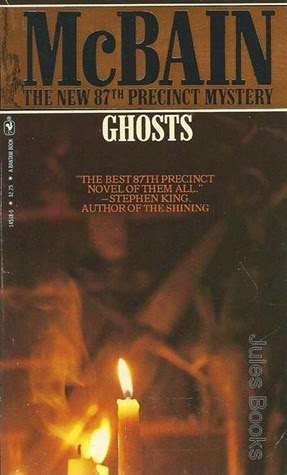 This is another very entertaining entry in Ed McBain's 87th Precinct series and one of several through the years that take place during the holiday season.

As Christmas approaches, Steve Carella is called to the scene of a murder. A woman, on her way home from work, stops by the grocery store and is then stabbed to death on the sidewalk in front of her apartment building. As Carella and other detectives gather at the scene, a second call comes in, reporting another murder in the apartment house itself.

The detectives enter the building and find that a best-selling writer has been bound and then repeatedly stabbed to death. They conclude that the woman killed in the street outside was most likely an innocent bystander who got a look at the killer as he or she raced out of the building and was murdered so that she couldn't identify the killer.

The dead writer specialized in ghost stories and his very attractive girlfriend claims to be a medium who communicates with the spirit world. At the apartment she shared with the victim, she picks up strange vibrations that prove eerily prescient. Strangely, the medium very closely resembles Carella's wife, Teddy, which Carella finds very disorienting. Even more troublesome, the medium has a twin sister who seems to be starved for sex, which presents problems for Carella as the case progresses.

McBain deviates from his usual formula to include a bit of supernaturalism in this story, but it's all in good fun and this turns out to be one of the more interesting books in a very entertaining series. McBain is getting better and better as the series progresses, and now, thirty-four books into it, he's hitting the mark with virtually every effort. Fans of the series will want to be sure to find this one.
Posted by James L. Thane at 12:04 PM