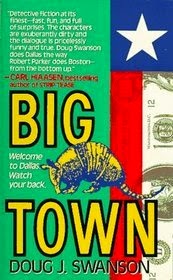 Jack Flippo is a young man with a bright future. He's married, living in a nice home and is a rising star in the Dallas, Texas DA's office, where Jack is employed as an Assistant DA. Then he makes the age-old mistake of sleeping with the wrong woman, who, unbeknownst to Jack, is actually the wife of a drug dealer currently being prosecuted by the DA. Suddenly, Jack is divorced, living in a crappy excuse for a house, and attempting to eek out a living as a wedding photographer and part-time unlicensed PI.

A sleezeball attorney attorney named Hal is retained by a woman claiming to be the wife of Buddy George, Jr., a motivational speaker who's making a pile of money encouraging people to improve their lot in life. The woman gives the attorney the room number of the hotel where Buddy will be entertaining a Sweet Young Thing named Sharronda following his evening's motivational presentation, and the attorney hires Jack to take the room next door and get the recordings that will enable the voluptuous Mrs. George to sue for divorce.

Jack is up for the challenge and sets up his equipment. But then things suddenly go wrong on a number of fronts and Jack finds himself under serious threat from the police, from the aforementioned Mr. George, from the lawyer's stunning client, and from a would-be tough guy and aspiring talk show host named Teddy Deuce who serves as muscle for Hal, the attorney.

It all makes for a very entertaining romp. Even though Jack's life is in the crapper, he still has his standards; he's still smart and funny as hell, and you can't help rooting for the guy. The supporting cast feels like it stepped out of a Carl Hiaasen novel by way of Elmore Leonard, and the story moves along at just the right pace.

First published in 1994, this is the first in what would ultimately become a six-book series featuring Jack Flippo. All in all, it's a fun read that will appeal to large numbers of people who enjoy their crime fiction on the somewhat lighter side.
Posted by James L. Thane at 12:17 PM