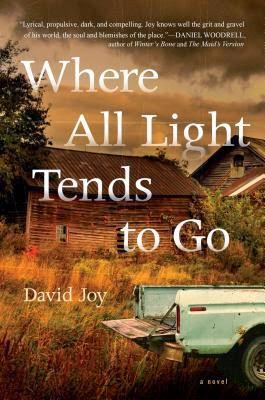 This is a fantastic debut novel, beautifully written with great characters and a wonderful sense of place. Set in the rural area of Cashiers, North Carolina, the protagonist is eighteen-year-old Jacob McNeely, whom we meet one night as he climbs the town's water tower to look down on the high school parking lot as his former classmates leave the building from their graduation ceremony. In particular, Jacob is searching for Maggie, the girl he loves and whose heart he broke two years earlier.

Jacob is not graduating with his class because he left school the first moment he could to join his father in the family meth business. Jacob's father is the kingpin of the local meth industry. He launders his cash through his auto body shop and pays off the cops to look the other way. In truth, Jacob comes from a long line of outlaws and he knew at an early age that he destiny was predetermined. He's been assisting his father for a good many years already, and even if he had higher aspirations, he understands that he hasn't a prayer of achieving them.

Jacob's mother lives alone in a cabin in the woods, surrounded by Jack Pines, having long ago become addicted to her husband's product line. Jacob laments that "I wasn't old enough to remember the day Daddy sent her there. The way he told it, she was stealing crank and spent most of her time climbing around the peter tree. So he sent her to this place. Loved her too much to give her nothing, but giving her anything at all squared things so he'd never have to love her again."

While Jacob knows he'll never escape from Cashiers, he hopes that Maggie will. She's the brightest and most beautiful girl in town, and Jacob know that she's one of the few who has a chance to escape, go to college and make a real future for herself. Accordingly, though they had loved each other since they were children, he broke off the relationship two years earlier so that she would not feel trapped, bound to Cashiers through him. He still cares for her very much, though, and when he sees that the future he envisions for her might be threatened, he acts in a way to protect her, irrespective of the consequences for himself.

In the meantime, his relationship with his father becomes increasingly rocky. His father is a strict disciplinarian who expects Jacob to obey his orders without question. Jacob is not cut from the same cloth, however, and when problems arise in the meth business and things get increasingly violent, Jacob will have some hard decisions to make.

As I suggested above, this is a great read, easily on a par with the best of Daniel Woodrell's books, and I promise that anyone who enjoyed Winter's Bone, for example, is going to love this one. 4.5 stars for me, and I eagerly await David Joy's next book.
Posted by James L. Thane at 3:31 PM