What the Bell Boy Saw 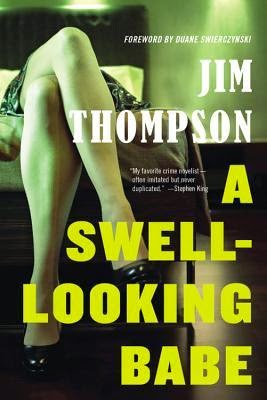 Dusty Rhodes is one seriously screwed-up dude. Of course when this book was first published in 1954, no one would have thought to call him a "dude," but no one would have disputed the fact that he was a young man with some pretty nasty problems--in other words, just the sort of protagonist that you'd expect to find in a novel by Jim Thompson.

Dusty has a little bit of college behind him--how much is not exactly clear--and he had once hoped to go to medical school. But he had to drop out of school after his mother died and his father lost his job at the local high school. This is back in the days of the Red Scare, and the local crusaders have accused the elder Mr. Rhodes of signing a petition upholding the right of free speech in America. And back in that day and age, such an accusation was more than enough to get one fired from a position of such responsibility, at least in a small conservative town in Texas where the story is apparently set.

Dusty thus takes a job as the night bell boy at the Manton Hotel. He could have chosen another job at the hotel, but figuring the tips involved, this is the one that pays the most money and Dusty needs all he can get now that he's the sole support of both himself and his father who, in addition to being unemployed, is also in failing health.

Dusty is a very attractive young man, but he's only ever loved one woman and that relationship turned out very badly. He's convinced that there will never be another woman in his life but then, early one morning, Marcia Hillis checks into the hotel. She's the most beautiful woman Dusty has ever seen and he concludes fairly quickly that she is now the only woman in whom he will ever be interested again.

The Manton is a high class hotel, and they have very strict rules about bell boys fraternizing with the female guests. Up to this point, Dusty has never been tempted to chance breaking the rule, but he might make an exception in this case, especially after the delectable Ms. Hillis indicates an interest in him.

Also residing in the hotel is a small-time gangster named Tug Trowbridge. Trowbridge befriends Dusty and tips him handsomely, and any well-seasoned crime fiction reader understands that the combination of the arrival of Marcia Hillis along with the friendship of Tug Trowbridge is bound to mean trouble for poor Dusty. Dusty ultimately realizes it too, but not before he takes that fatal first step down the wrong path that always spells doom for the poor mope who finds himself the main character in a noir novel.

This book is not the equal of some of Thompson's better-known work like Pop. 1280 or The Killer Inside Me, but it's a lot of fun nonetheless. Watching poor Dusty unravel is as gripping as watching the evil schemes that some of the characters have plotted unfold, and to no one's great surprise, before long Dusty Rhodes may well rue the day he ever encountered a swell-looking babe like Marcia Hillis.
Posted by James L. Thane at 3:12 PM