Steve Carella Tries to Determine Who Killed the Calypso King 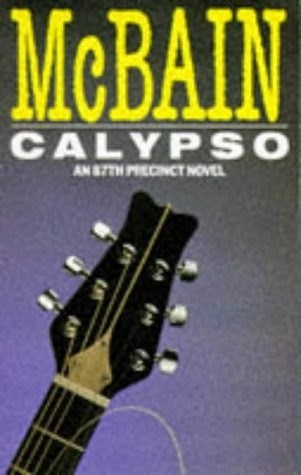 George Chadderton is a musician who bills himself as the "Calypso King." Late one rainy September night, he leaves a gig with his manager and as the two are walking down the street someone comes up from behind them and shoots George to death. The killer also wounds George's manager in the shoulder. The manager falls to the ground and the killer stands over him and fires directly at his head. But the gun is empty and the killer is forced to flee, leaving the manager still alive.

A few hours later, it's still pouring rain, and a hooker who's looking for one last trick is shot to death with the same gun that killed Chadderton. Chadderton's murder took place in Isola's 87th Precinct and the case falls to veteran detectives Steve Carella and Meyer Meyer. They wake up the newly-widowed Mrs. Chadderton to give her the bad news while surreptitiously checking to see if she might have been the shooter herself. (They don't yet know that there is a second victim because the hooker was killed in another precinct and it will take a while before anyone realizes that the ballistics match.)

Mrs. Chadderton is a very attractive woman who works at a topless club. She appears to be devastated by her husband's death and has no idea who might have wanted to kill him. Sadly, there appear to be no leads at all, and in investigating the victim's background, the detectives discover nothing of interest save for the fact that Chadderton's brother, Santo, seems to have disappeared into thin air seven years earlier.

That's neither here nor there, and the case presents one of the toughest challenges to confront Carella and friends in any of the first thirty-three books in this series. This is also one of the best books in the series, and it first appeared in 1979. By then, McBain had really hit his stride and this is one that any fan of the series will not want to miss.
Posted by James L. Thane at 2:28 PM