The Saga of Charlie Hood Continues 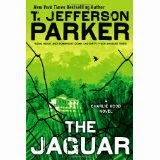 This is the fifth out of six books in T. Jefferson Parker's series featuring Charlie Hood, an L. A. County Sheriff's deputy, and the deeper one gets into the series the more difficult the books are to review, at least for me. I find that this one is virtually impossible to discuss without giving away critical information that might spoil the earlier books for people who haven't read them yet.

What differentiates this series from most others is that the six books in the series constitute a single long narrative that has been divided into six separate volumes. In most other series you have a continuing series character, usually with a small supporting cast, but the stories themselves are almost always discrete. If you're reading John Sandford's Lucas Davenport series, for example, you know going in that there are now twenty-three books in the series and so, obviously, Lucas must have survived whatever challenges and dangers he might have faced in the first twenty-two. But you know nothing of the fate of the rest of the characters.

Since there are six books in the Charlie Hood series, the reader understands that Hood has somehow survived the first five. But the problem one faces when attempting to review any of the later books in the series is that you inevitably have to refer to other characters who have also survived the earlier books when they well might not have. And this, I think, is bound to spoil the tension is some of the earlier books for readers who haven't gotten to them yet. I would argue that the tease on the book's jacket does exactly that as well.

And so, attempting to be as circumspect as possible, I will simply note that for a while now, Charlie Hood has been on loan to an ATF task force that is attempting to staunch the flow of guns and other weapons from the U.S. into Mexico. This has brought Charlie and other characters into direct conflict with the drug lords that run Mexico's infamous cartels.

In this case, one of those drug lords kidnaps someone close to Hood and demands that a million dollars in ransom be delivered deep into Mexico. The clock is ticking and if the money is not delivered on time, the victim will be skinned alive. Charlie assumes the task of delivering the money, even though he has a history with the drug lord in question that is almost certain to put Charlie in grave danger. And that's all I'm comfortable in saying about the plot even though, as I said above, the publisher apparently feels comfortable in giving away quite a bit more.

I've really enjoyed this series from the beginning, but this book was something of a disappointment by comparison especially to the first and second books. Beginning in the third book, Parker introduced a non-conventional character and since that time, I don't think that the books have worked as well. I find that I'm increasingly unable to suspend disbelief to the extent that the later books have required, and so I haven't enjoyed them quite as much. Parker is a very gifted writer and it's still a lot of fun to read his prose, but I wish it were in service of a plot that I could buy into more easily.

I'm looking forward very much to Famous and the Dead, The, which is the last book in the series, and I hope that it returns the series to the very high note on which it opened.

One last note: As anyone who reads my reviews knows, I am constantly urging people to read a series in order. I would only add that it is absolutely essential in this case. A reader who begins in the middle of the series will have a great deal of difficulty really appreciating the complexity of the story and will cheat him or herself out of enjoying this long and involved story to the fullest extent.
Posted by James L. Thane at 11:13 AM