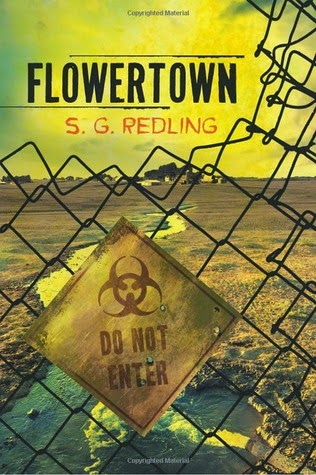 Seven years ago, the folks at Feno Chemical developed a new pesticide that was designed, as always, to improve the lives of all Americans--Better Living Through Chemistry, and all that.

Well, as it turns out, maybe not so much in this case. When Feno accidentally spills the new pesticide near a small town in rural Iowa, the results are catastrophic. Scores of people die immediately; hundreds of others are left extremely sick and contagious, and there is no immediate cure for the diseases that now ravage the survivors.

Said survivors are herded into a camp, sealed off from the rest of the country, and guarded by the U.S. Army while scientists attempt to discover a cure that will allow them to be integrated back into the general U.S. population. The camp becomes known as Flowertown because of the sickly sweet smell that the survivors give off. The soldiers, medical personnel and others who interact with the residents are inoculated to protect them from being contaminated by the Flowertownians.

Seven years down the road, there's still no cure and conditions in Flowertown are rapidly deteriorating. Some residents still hope for a cure and for the chance to leave the camp; others are resigned to their fate and assume that they will die in Flowertown; others believe that a massive conspiracy is at work, or maybe several conspiracies, and that they are all only pawns in the hands of Feno Chemical and other larger, sinister forces.

Ellie Cauley simply doesn't care anymore. She knows she's never going to get out of the camp and she copes by getting high and by having torrid sex with an army officer who should be off limits. Her behavior is against the rules, of course, but Ellie is long past caring about rules.

Suddenly, though, conditions in Flowertown go from bad to worse. Feno Chemical and the army begin cracking down hard on the residents; Ellie finds herself under intense scrutiny, and the town is rocked by a series of unanticipated and seemingly inexplicable developments. Maybe those conspiracy nuts aren't so nutty after all, and as events spiral out of control, Ellie is drawn into a storm of intrigue and violence that may drag her down with the rest of Flowertown, just as she decides that there may be things she cares about after all.

In Flowertown, S. G. Redling, author of The Widow File: A Thriller and Redemption Key, has created another great protagonist and turned her loose in a unique and intriguing story. In many ways, Ellie is not a very appealing person, but she's an irresistible character in a story like this. The plot has more than enough satisfying twists and turns, and as has been the case with Redling's other books, this one will have readers turning the pages late into the night.
Posted by James L. Thane at 3:11 PM