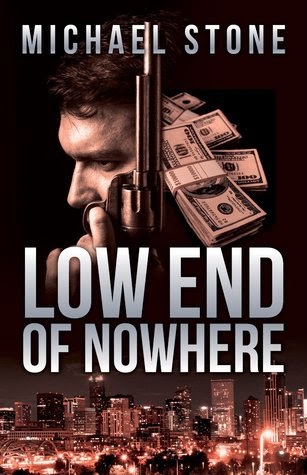 This is a very entertaining, hard-boiled novel featuring a skip tracer/bounty hunter who goes by the name of Streeter. He's a former football player, bouncer and accountant with four ex-wives. He now lives and works out of a room in a former church in Denver and tries to maintain as low a profile as possible while working principally for a bail bondsman named Frank Dazzler who also has his home and office in the church.

As the book opens, Streeter is in pursuit of a very sexy woman named Story Moffatt. She's the hard-charging owner of an advertising agency, and she's claiming debilitating injuries suffered in an accident. She's hoping to cash in on a big insurance settlement, but her plans go down the tubes when Streeter snaps pictures of her playing a mean game of squash with no apparent difficulty at all.

Story is disappointed, of course, but she's also a realist. And she could use a man like Streeter. Her boyfriend, a realtor and drug dealer, has recently died in a car crash. His will left everything to Story and she knows that he had a huge stash of cash concealed somewhere. She's been unable to find it but figures that someone as resourceful as Streeter might be able to get the job done. She offers him a third of whatever he can find.

Streeter agrees. The problem is that he and Story are not the only ones looking for the missing loot. Also on the hunt are an impossibly sleazy lawyer, his scheming and sexy receptionist/girlfriend, the lawyer's thuggish "investigators," and a seriously bent cop.

It's a great cast of characters and Stone really puts them through their paces. The story moves along swiftly and there's plenty of action along with a fair bit of wry humor. This book should appeal to readers who enjoy authors like Elmore Leonard and Tom Kakonis--all in all, a very pleasant way to spend a long evening.