Murder and Mayhem on the Edge of the Crazies 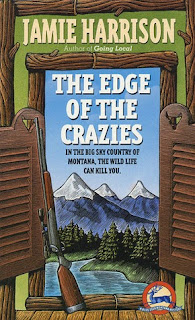 Beginning in 1995, Jamie Harrison, the daughter of novelist Jim Harrison, wrote four novels set in the fictional town of Blue Deer, Montana, located on the edge of the Crazy Mountains, very near where the real town of Livingston, Montana would be found. The main protagonist was a young archaeologist, Jules Clement, who returned home to Blue Deer and was elected to the office of County Sheriff, a position that had once been held by his father.

Blue Deer is populated with a mix of eccentric characters, some of whom are long-time residents and others of whom are more recent arrivals, including a number of writers, artists and other celebrities who have found their way to Big Sky Country in the last few years. Among other things, Harrison cleverly explores the tensions that have developed between native Montanans and the new arrivals.

The Edge of the Crazies, a wonderfully titled book, opens when someone takes a couple of shots at a screenwriter named George Blackwater. George is wounded but survives, and as Jules begins to investigage the shooting, it appears that there are any number of potential suspects, including George's wife, Mona.

Jules is unlike any other sheriff that the reader has likely encountered. But so, for that matter, are many of the characters in this book, many of whom are jumping in and out of bed with each other with little regard for the potential consequences. Watching the interactions among the characters is a great deal of fun and there seems little urgency in solving any of the crimes that occur as the story proceeds.

Before long, someone is murdered and it appears that the crimes now unsettling Blue Deer might relate back to a mysterious death that occurred years earlier. Jules clearly has his work cut out for him as he must negotiate his way through a minefield of quirky characters and grudges both ancient and more recent. Harrison clearly has a knack for creating unique characters and for understanding the dynamics of a small town in the midst of change. Virtually any fan of crime fiction should enjoy this book.
Posted by James L. Thane at 3:19 PM