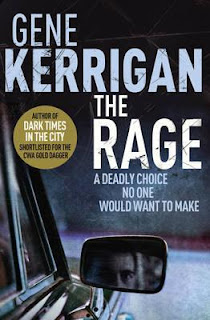 This is an excellent police procedural set in contemporary Ireland where the high-flying Irish economy has collapsed into a heap, leaving a trail of destruction and desperation in its wake.

As the book opens, Detective Sergeant Bob Tidey is caught in an act of perjury when he claims that he did not see an act of possible police brutality that occurred in a bar where he was having a drink. The consequences of his action remain to be determined. Meanwhile, a corrupt banker who was caught up in the financial collapse is shot to death in his expensive home and Tidey is assigned to the case. It's very quickly going to take him in a direction that his superiors would rather not go, leaving Tidey in yet another bind.

As Tidey wrestles with these problems, a minor criminal named Vincent Naylor is released from prison where he has been serving a sentence for assault. Naylor is a bit older and considerably wiser as a result of his stint in prison and he emerges with a new sense of discipline. With his older brother, he plots an audacious and clever crime, and he is determined to ignore any distraction that might have earlier compromised his chances of success.

At the same time, an elderly nun is wrestling with her conscience over actions she took years earlier in the service of the church. One afternoon, she sees something out her window that troubles her and she calls Bob Tidey, whom she knows from an earlier incident. This sets into motion a string of developments that will have enormous consequences for significant numbers of people.

It would be unfair to say anything beyond that, but Gene Kerrigan has created a great cast of very believable characters and inserted them into an especially intriguing plot. Additionally, his commentary about the current social and economic climate in Ireland seems dead-on. This is a book that won the Gold Dagger from the Crime Writers Association for Best Crime Novel of 2012 and it should appeal to large numbers of crime fiction fans.
Posted by James L. Thane at 6:59 PM