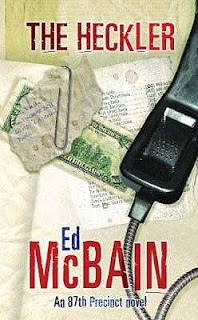 This is the twelfth book in Ed McBain's 87th Precinct series and the first in which a character known as the Deaf Man appears. The Deaf Man is a criminal mastermind who will appear in several subsequent books and who has a special gift for tormenting Steve Carella and the other detectives of the 87th.

The Heckler begins when a businessman reports that he has become the victim of an apparent practical joker who phones him repeatedly, warning him to vacate the loft where he runs a clothing business or he will be killed. Later, someone begins shipping the clothier paper supplies, furniture and other such things that he didn't order, causing chaos in the man's day-to-day affairs.

The detectives have no luck trying to determine who might be tormenting the businessman or why. Then other businessmen begin calling and reporting similar problems. Then, in a seemingly unrelated development, an elderly man is found murdered and left naked, save for his shoes, in a city park. Carella finds a burned uniform of some sort that may have belonged to the dead man, but who was the man and who would have killed him, stripped him and then burned his uniform?

The detectives work as best they can, trying to puzzle out solutions both to the killing and to the harassment that is being perpetrated upon the complaining businessmen. In the meantime, we watch the Deaf Man and his confederates planning a very carefully calculated crime. All of it will lead to an explosive climax and the reader will be treated to a very entertaining ride along the way. This is one of the better books in the series and fans of the 87th Precinct will not want to miss it.
Posted by James L. Thane at 12:24 PM