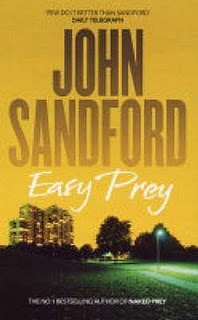 Minnesota native Sharon Olson has blossomed into supermodel Alie'e Maison, and she now returns to Minneapolis for a very sexy photo shoot. Following a hard day's work, she spends a hard night partying at the home of a wealthy socialite. Alie'e shoots a little heroin, enjoys some playful sex with two other women, and then suddenly turns up choked to death. When the cops arrive, they discover yet another woman who has been killed and stuffed into a closet. Things are going to get very dicey in a big hurry, which means it's time to call out Assistant Chief Lucas Davenport, the biggest gun in the Minneapolis PD.

As Lucas and his usual team members begin the investigation, there's precious little in the way of evidence and no real suspects. Perhaps eighty people passed through the party where the women were murdered, but none of them stands out as a potential killer. It's possible that a rejected lover killed Maison; perhaps a dope deal went wrong, but there's no way for Lucas to get a handle on it.

But then another person closely tied to Alie'e is murdered, and others will follow. It's possible that one killer is responsible for all of the crimes, but Lucas also realizes that two killers may be involved, working from different motives. The pressure to solve the case is immense. Because of Maison's notoriety as a superstar model, the national press and a variety of other vultures are circling the scene, demanding immediate results. But what evidence there is leads in several directions, presenting Davenport with one of the thorniest cases he's ever had to resolve.

Davenport's personal life is almost as complicated as his professional one. He's still estranged from Weather Karkinnen who had once planned to marry him and for whom he still has strong feelings. Then, out of nowhere, a chance meeting with an old college lover further complicates matters. If that weren't enough, an attractive and interesting woman involved in the case also demonstrates an interest.

If there is a tiny complaint to be made about this book, it would revolve about Davenport's juggling all of these romantic entanglements while in the midst of a complicated investigation where the bodies are falling left and right. That aside, this is another very good entry in an excellent series. As always, Sandford manages to mix just the right amount of humor, much of it politically incorrect, into a very suspenseful tale. It's always fun to spend time in the company of Lucas and his regular crew, and there are a number of other very interesting characters as well.

It's hard to imagine any fan of the series who would not enjoy this book. Lots of other readers would like it as well, but they would be best advised to start with the first in the series, Rules Of Prey, and work their way forward to this one. They won't regret doing so.
Posted by James L. Thane at 5:04 PM