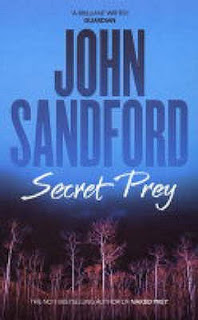 This is one of the best books in John Sandford's Prey series, featuring Minneapolis police detective Lucas Davenport, with a complex, intelligent plot and a clever, unique villain who pushes Davenport to the limit.

As the book opens, a wealthy banker, who is about to become even wealthier due to the bank merger he has engineered, is shot out of a deer stand in the Minnesota woods. There are any number of people who might have wanted him dead, including the three colleagues who are hunting with him, all of whom had the means, motive and opportunity to commit the crime. But there's precious little evidence to point the finger at anyone.

Davenport begins the investigation in the midst of a personal crisis. His love life is in a shambles and he's slipping back into the depression that had nearly crippled him some time earlier. Even the thrill of a particularly interesting and dangerous chase is not enough to pull him out of it his dark mood.

The investigation focuses initially on the merger that the banker was bringing to fruition. The merger will affect a lot of other lives, perhaps derailing the careers of some while offering opportunities for a handful of others. The jockeying begins even before the body is cold and Lucas and his team must sort through a veritable chess match of moves and counter moves by those left in the wake of the banker's demise, all of whom are maneuvering for position.

Inevitably, the infighting will get serious--and deadly. Another victim will fall, and again there's very little evidence pointing to the killer. But as Lucas pushes the investigation forward, things suddenly get very personal. As other villains have learned, it's generally a very bad idea to piss off Lucas Davenport, but in this case, a diabolical killer might just get away with it.

There are a number of intriguing characters in this book on both sides of the law. The dialog is especially witty and there's a lot of great action. Any fan of the Prey series who has not yet gotten to this book will want to do so ASAP--but only after reading all of the books leading up to it.
Posted by James L. Thane at 6:24 PM