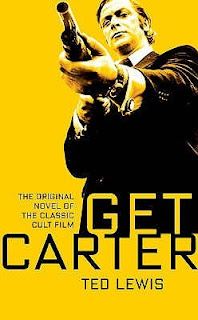 This book was originally published in 1970 as Jack's Return Home. Then in 1971, it was filmed as Get Carter starring Michael Cain, and the book was subsequently re-released with the new title. This is a very dark, hard-boiled novel and it is credited with helping start the noir school of British crime fiction.

The main protagonist, Jack Carter, works for a pair of dodgy blokes named Gerald and Les who skate along the edges of the law. Jack is skating right out there with them on ice that's even thinner, given that Jack is also conducting a clandestine affair with Gerald's wife, Audrey.

As the book opens, we find Jack on a train, returning to his home town of Doncaster. He's going back to attend the funeral of his only brother, Frank. The authorities report that Frank died, driving drunk and crashing his car after drinking most of a bottle of Scotch. The only problem with the official scenario is, as Jack well knows, that Frank didn't drink Scotch.

Jack and Frank have been estranged for years, but Frank was still his little brother and Jack still carries very fond memories of the time they spent growing up together. Jack is also concerned about the fate of Frank's fifteen-year old daughter, Doreen, who is now orphaned. Mostly Jack is enormously pissed at the people who killed his brother and who didn't even trouble themselves enough to make the "accident" look legitimate.

Once the funeral is over, Jack begins poking around the dark underbelly of Doncaster in an effort to determine what Frank might have been involved in and who might have been angry enough with him to kill him. In the process, he's going to have to deal with a lot of lowlifes and upset more than a few apple carts. Jack couldn't care less, and when the local crime bosses decide that it's time to get Carter, Jack will only be too happy to meet them halfway.

This is a lean, spare novel that's very well written and which should appeal to anyone who likes their crime fiction dark and unnerving, populated with few, if any, redeemable characters.
Posted by James L. Thane at 11:06 AM