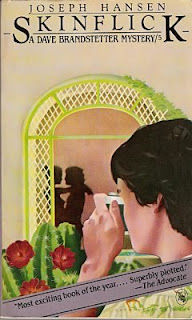 This is the fifth of Joseph Hansen's series featuring insurance investigator Dave Brandstetter, and it's among the best in the bunch. As the book opens, Dave is going through some significant changes in his life but, as with any good P.I., the job always comes first.

Dave's company has insured the life of Gerald Dawson, a man with deeply held religious convictions who was convinced that the world around him was going to hell in a hand basket. Dawson was determined to do what he could to at least slow the rate of decline, even if it meant breaking the law. He and associates from his fundamentalist church believed that they answered to a Higher Law and so felt no guilt about things like bashing gays and trashing bookstores that sold pornography.

As I suggested above, this is one of the best books in the Brandstetter series. It's a tight plot; the characters are interesting and, as always, Dave's humanity shows through from beginning to end. The series was published between 1970 and 1991, and it established itself early on as one of the best of the P.I. series set in L.A. to follow Raymond Chandler.

What set the series apart more than anything else was the fact that Dave Brandstetter was openly gay. Hansen presents this simply as a fact of life and in many of the books, Brandstetter's love life constitutes a theme of the novel, just as any other P.I.'s love life might. But there's little time for that here; Dave is awfully busy with the case at hand. As always, it's fun watching him work.
Posted by James L. Thane at 5:56 PM