A Farewell to Parker 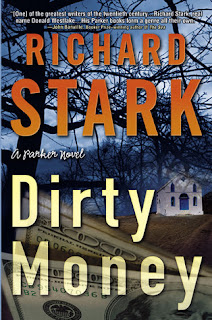 This is the twenty-fourth and final volume in Richard Stark's excellent long-running series featuring Parker, a cold, amoral, methodical criminal. Parker was almost always involved in a gang of crooks that had been pulled together for some specific job, usually a robbery of some sort. In each of these capers, it always turned out that some of the gang members were more dependable than others; there was usually a weak link or a turn of bad luck somewhere along the way, and Parker would have to scramble, using all of his resources, to save himself and as much of the loot as possible.

Parker was always the most competent and often the deadliest man among the thieves and others he partnered with. He did what needed to be done, and if that involved leaving a trail of bodies in his wake, well then, that was just what the job demanded. No hard feelings.

Along the way, Stark (a pseudonym for master crime writer Donald Westlake) took an extented break from the Parker books between 1974's Butcher's Moon, the sixteenth book in the series, and 1997's Comeback, the seventeenth. The earlier books tended to be leaner and cut closer to the bone. The later ones are not quite so spare and Parker might be just a tad softer. They are still a lot of fun, but the first sixteen are grittier and generally better.

In the twenty second book, Nobody Runs Forever, Parker and his confederates knocked over an armored car that was carrying a little over two million dollars from one bank to another. But the law moved in so swiftly that the gang could not get away with the money. They were forced to stash it in the choir loft of an abandoned rurual church.

In the twenty-third book, Ask The Parrot, Parker is still struggling to save himself in the days after the robbery, and Dirty Money takes place shortly thereafter. Things are still hot; the cops still have roadblocks up searching for the robbers, and they are circulating sketches of the criminals.

To make matters worse, it turns out that the serial numbers on all of the bills the gang stole had been recorded. One of the robbers, Nick Daliesa, attempted to pass one of the bills and was caught. He then killed a deputy marshal and escaped again. Parker knows if Dalesia is caught he will try to trade the stolen money, or worse the identity of the other gang members, in order to obtain leniency.

As much as he hates to do it, Parker must return to the scene of the crime in an effort to recover the money and deal with his ex-confederate before Parker himself is compromised. To make matters worse, a female bounty hunter now inserts herself into the situation, demanding a share of the loot.

It's a lot of fun watching Parker jump from one crisis to another in an effort to keep his life from going completely off the rails, especially when he knows that, even under the best of circumstances, the money will be worth only ten cents on the dollar. A harsher man than I might argue that the book could have been a bit tighter, more along the lines of the earlier entries in the series, but that would be a small complaint and I'm certainly not going to make it at this point.

I put off reading this book for over two years, simply because I couldn't bear the thought that I would never have another fresh Parker waiting for me, and I hated getting to the last page. The book itself may rate four stars, but the series overall is five stars all the way. It's one of the best crime fiction series ever published and I'm already looking forward to starting it all over again.
Posted by James L. Thane at 5:30 PM