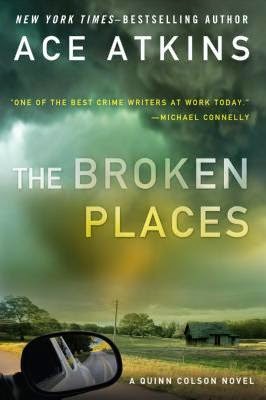 The Broken Places is the third installment in Ace Atkins' Quinn Colson series, and it's the best one yet, which is saying something given that the first two were really very good.

Colson, a veteran of the war in Afghanistan, has returned home to the small rural town of Jericho, Mississippi, and has become the county sheriff. A year into the job, he's still feeling his way along and adjusting into his new life. Also returning home is Quinn's sister, Caddy, a troubled young single mother with a small son--a woman who's lived a hard life already and is struggling to gain some purchase.

The problem is that Caddy has taken up with an ex-con named Jamey Dixon. Dixon, also from Jericho, was convicted of murder and sent to Mississippi's infamous Parchman Farm. There, he claimed to have had a conversion experience and managed to earn a theology degree in a prison program. Shortly thereafter, he somehow managed to get a very mysterious pardon from the state governor. He's now back in Jericho, claiming to be redeemed and starting his own church.

Virtually no one is buying into his program, certainly not Quinn Colson and most certainly not the family of the woman Dixon was accused of killing. The one exception is Caddy Colson, who seems to be blinded by love and who believes that Dixon is completely sincere and that he was railroaded into prison to begin with.

As the story opens, two hardened criminals, imprisoned for an armored car robbery escape from Parchman and head to Jericho to rendezvous with Jamey Dixon. Dixon had befriended them in prison and they believe he is holding the money for the robbery in trust for them.

Inevitably, all sorts of devious complications ensue, causing a variety of headaches both personal and professional for Quinn Colson. And if that were not enough, a major storm is bearing down on Jericho, threatening the town's very survival. It all makes for a great, page-turning story with a terrific climax.

Atkins writes beautifully and creates believable and memorable characters. He also creates a very strong sense of place, and as all of these storms, natural and man-made, begin to descend on Jericho, the reader feels as if he or she were directly in the line of fire. It's a great read, and I can hardly wait for the next book in the series.