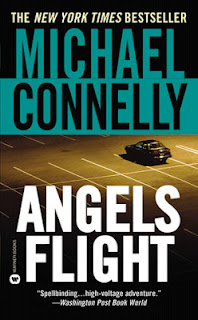 This is another very good entry in Michael Connelly's series featuring L.A. homicide detective Harry Bosch. The case opens in the middle of the night when Harry's team is called out to the scene of a double homicide. A man and a woman have been shot to death on a trolley called Angels Flight. Harry cannot figure out why he has been called since his team is out of the rotation that night.


He arrives at the scene to find that one of the victims is an African American attorney named Howard Elias. Elias has made a career and a name for himself by suing the L.A.P.D. in cases where Elias charges police abuse of the city's minority citizens. Elias is in the midst of preparing an explosive new case against several police detectives.

Obviously, this will be a high profile case, and Harry isn't certain whether he's been assigned to the case because of his excellent record or because he's being set up as the fall guy if the case isn't solved. The cynic in Harry speculates that he's been given the case because the other two members of his team are black and the department hopes that this will help tamp down the furor that is bound to explode in the black community when the victim's names are announced.

Given the way the shooting occurred, Harry quickly concludes that Elias was the principal target and that the poor female victim was simply in the wrong place at the wrong time. The real difficulty in the case is that the most obvious suspects are the cops that Elias had sued or was in the process of suing.

Harry's team must thus navigate very treacherous waters. Lots of cops make it clear that they just want the crime written off as a robbery gone bad and swept under the rug. The black community wants "justice" which in their vew apparently means that they won't be satisfied until a cop is indicted and convicted for the killings. And, of course, Harry's bosses in the department seem more concerned about protecting the department's reputation than they do in seeking the real truth.

Harry being Harry, he is determined to solve the crime and let the chips fall where they may. The department throws all sorts of obstacles in the way of his investigation, and the black community is seething. Any spark could touch off a major riot. If all of this weren't bad enough, Harry is working through marital problems. The question is, can he push through all of this and solve the crime before the city explodes?

Connelly has written here a complex story with a number of flawed and well-drawn characters, principal among them Harry Bosch. He demonstrates once again his intimate knowledge of L.A., a city he obviously cares about deeply. Angels Flight makes an even stronger argument that no one is writing better police procedurals these days than Michael Connelly
Posted by James L. Thane at 11:49 AM