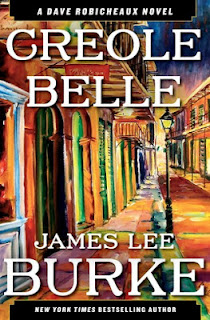 James Lee Burke's sixteenth Dave Robicheaux novel, The Tin Roof Blowdown, took place in the aftermath of Hurricane Katrina. Dave's beloved southern Louisiana had been devastated by the storm and the recovery had been badly bungled by inept government officials, some of whom cared very little about the people of the state and their lives that had been so terribly disrupted.


Creole Belle, the nineteenth book in the series takes place in the wake of the BP oil spill, and again, the state is under assault by forces beyond its control. As the book opens, Dave is hospitalized, recovering from a bad gunshot wound he suffered in a shootout a month earlier. While in the hospital and under the influence of morphine, which he's being given to dull the pain, Dave is visited by a beautiful young woman named Tee Jolie Melton. Tee Jolie is pregnant by a married man and spills out her troubles to Dave. She also suggests that she has knowledge about the problems that led to the explosion and spill in the Gulf. But did Dave really see the young woman, or was she only an apparition brought on by the morphine? Tee Jolie, who is a singer, leaves Dave an iPod and includes three of her own songs on the playlist. Dave has the iPod, but only he is able to hear Tee Jolie's three songs.

The problem is compounded by the fact that Tee Jolie disappeared several weeks before she allegedly visited Dave. Her sister is also missing. Dave believes that the two young women are in grave danger and is determined to find them. His search involves him in the lives of a number of rich and malevolent people who have lots of dirty secrets that they do not want revealed in the light of day. Before long, they will see Dave as a threat to their well-being and, as usual, this will not be good news for Dave.

As always, Dave enlists the aid of his long-time friend and alter-ego Clete Purcell. As readers of this series know well, to call Clete a loose cannon does not begin to scratch the surface of the man's character. Like Dave, Clete is a troubled man whose difficulties now stretch back to events that occurred decades ago. In this case, Clete has additional issues and problems of his own that may get in the way of his ability to assist Dave and that may even interfere with their long-time friendship.

After eighteen previous Robicheaux novels, there's little new that one can say about the series and even fewer fresh ways to praise the writing of James Lee Burke who is not only one of America's great crime writers but one of its best writers period. After all this time and after all these books, Burke is still at the top of his game. Sadly, both Dave Robicheax and Clete Purcell are feeling their age and know that their string cannot have much longer to play out. Happily, the same cannot be said for their creator.
Posted by James L. Thane at 3:55 PM