A Blue Deer Thaw--But Will It Come In Time? 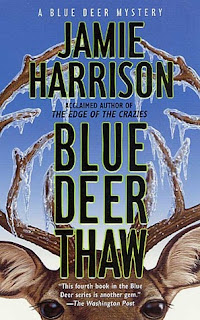 Winter is the cruelest season in the tiny town of Blue Deer, Montana. The weather is awful; Seasonal Affective Disorder is crushing the spirits of more than a few of the town's citizens; people are freezing to death in the snow or in the icy rivers; vehicular accidents are up; suicides are spiking, and everyone can hardly wait for spring to arrive.

Jules Clement, the sheriff of Absaroka County, is as anxious as anyone for the winter to be over, because he is the one who has to deal with all above-mentioned problems. But at least he has found a diversion: He's spending some of his off-duty hours cataloging the art collection belonging to the eccentric, millionaire owner of the Sacajawea Hotel. This gives him a chance to utilize his skills as an archaeologist, which was his profession before he returned home to Blue Deer to run for sheriff.

The hotel renovation is proceeding slowly and not so surely, which is a major concern for Jules' best friends, Alice and Peter, who are finally getting married after living together for the last ten years. They are planning to hold a party, the likes of which Blue Deer has never seen, but it all depends on the hotel being finished and ready to go. That's an iffy proposition and a lot of people are on edge as a result.

In the middle of all of this, a woman dies, drunk, during a major snowstorm only a few yards from her home. It may be an accident, but Jules is suspicious of the woman's husband who's a major pain in the ass and who seems not to care at all about the fact that his wife has died. Then, two bodies are pulled from local rivers, suicides or maybe not.

In addition, there's all the usual crap that goes down in a small town where everyone knows everyone else, and Jules is sick and tired of dealing with it all. He's also developing feelings for his beautiful deputy, Caroline, which would be inappropriate given their professional relationship. But, this is Blue Deer after all, not some large city where the department might have a pain-in-the-ass HR director, and so who knows what might happen?

Jules is threatening to hang up his spurs and walk away from it all, but in the meantime he has to deal with these various crises, not the least of which is the question of whether the upcoming marriage between Peter and Alice will actually come off. As was the case in the previous three books in this series, it's great fun watching Jules deal with all of this and following the adventures of the town's other eccentric characters.

Each time I review one of these books, I feel compelled to point out that these are not cozy mysteries, even though on the surface they may sound like it. These are books that will entertain large numbers of readers across the crime fiction spectrum, and a reader closing in on the end of this one can only hope that Jules Clement will not make good on his threat to ride off into the sunset.
Posted by James L. Thane at 3:19 PM