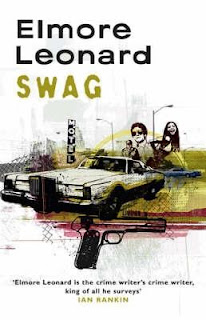 Frank Ryan is working as a used car salesman when he catches Ernest Stickly, Jr.--"Stick"--boosting a car from the lot. Frank picks Stick out of a lineup, and the cops seem to have Stick dead to rights, but when the case comes to trial, Frank takes the stand and claims that he's no longer sure about his identification. Without Frank's testimony, the case collapses and Stick goes free.

Frank later catches up with Stick and says that he admires his talent and the only reason that he even called the cops was because he felt like Stick was punking him by stealing a car right under his nose. Frank is looking for a partner to go into the armed robbery business together. He's made a careful study of crime and has concluded that armed robbery provides the best returns with the least amount of risk. He's also compiled a list of ten rules that he believes will guarantee success in this endeavor. (This book was first published as Ryan's Rules.)

Stick signs on and the pair pull a string of successful robberies in the Detroit suburbs during a very profitable summer. The two are living large in an apartment complex where there are always nubile women around the pool and where there's always a party going on. But then Frank comes up with a grand scheme to knock over a department store. This would by a large step up from the liquor and grocery stores that have been their principal targets thus far. More important, it would require that they violate at least a couple of Ryan's Rules. Stick is reluctant, but Frank says that now they are experienced criminals they can adjust the rules to take advantage of new opportunities.

This may or may not be a good idea for Frank and Stick, but it's great fun for the reader. This is one of Leonard's earlier crime novels after a career of writing westerns, and it may not be quite the equal of some of the books that Leonard would write later, but it contains all the traits that one looks for in a book by EL, including great characters and dialogue that could only be written by Leonard.

Leonard was much more interested in writing about bad guys than good ones, at least until he created Raylan Givens, and he excelled at creating small-time crooks who lived on the margins and dreamed of making a big score. Frank Ryan and Ernest Stickly, Jr. are great examples, and this is a book that will appeal to virtually any fan of crime fiction.